Thiago Santos rescued a point for Mumbai City FC with a 71st minute strike against hosts Jamshedpur FC as the two teams settled for an entertaining 2-2 draw in an Indian Super League encounter on Friday. 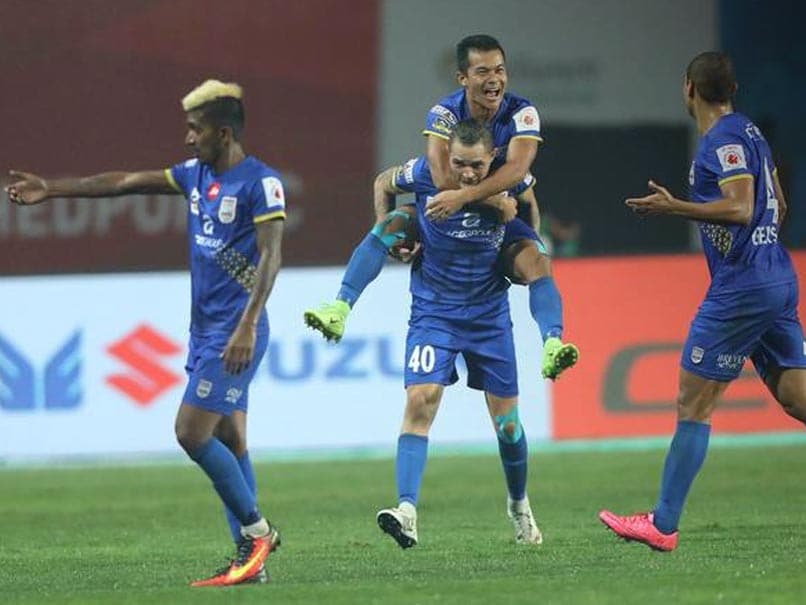 Thiago Santos rescued a point for Mumbai City FC with a 71st minute strike against hosts Jamshedpur FC as the two teams settled for an entertaining 2-2 draw in an Indian Super League encounter on Friday. The draw took Mumbai City to the top four with 14 points from nine matches while Jamshedpur FC are placed sixth on the table with 10 points from eight matches. Thiago put the visitors ahead in the 20th minute while Nigerian striker Izu Azuka scored two late goals in the first-half to give the hosts a 2-1 lead going into the break. It was Thiago again, who struck midway in the second half and helped them leave the Steel City with a point but there was no denying the class of his first goal. Thiago scored what can be best described as a stunning goal for Mumbai City FC in the 24th minute.

After a throw in, Balwant Singh found Everton Santos who simply rolled the ball into the path of Thiago. The Brazilian was surrounded by Jamshedpur players all around, but he was still determined to push his way through.

He cut past one player, then second, and another one. To top it all, he finished the move with a sensational flick that found the top corner of the net.

It was a stunning effort from Thiago and the hosts were momentarily stunned. Their famous defence had crumbled, thanks to a moment of brilliance but they fought back in style with two quick goals in the 43rd and 45th minute to take a 2-1 lead at the breather.

Jamshedpur had not scored from open play this season and they finally got that goal in the 43rd minute. Jerry Mawhmingthanga found himself some space near the rival danger zone and drilled in a low cross in the path of Kervens Belfort.

His attempt was blocked by a Mumbai defender but the rebound fell nicely for Izu Azuka who didn't miss from such close range.

Two minutes later, Jamshedpur struck again. It was Azuka, this time though with a much difficult goal. It was Jerry who moved dangerously on the right and essayed a cross inside the box where the Nigerian finished with a classy effort.

In the second half, Jamshedpur were comfortable even though Mumbai City were asking questions but the hosts couldn't hold on to their lead.

Their citadel crumbled for the second time as Thiago was on target in the 71st minute, thanks to an inch-perfect pass from Everton.

Comments
Topics mentioned in this article
Mumbai City FC Jamshedpur FC Indian Super League Football
Get the latest updates on ICC T20 Worldcup 2022 and CWG 2022 check out the Schedule, Live Score and Medals Tally. Like us on Facebook or follow us on Twitter for more sports updates. You can also download the NDTV Cricket app for Android or iOS.