This was Dynamos' second consecutive loss after their 1-4 thrashing by Bengaluru FC on November 26. They now have just three points from three matches. 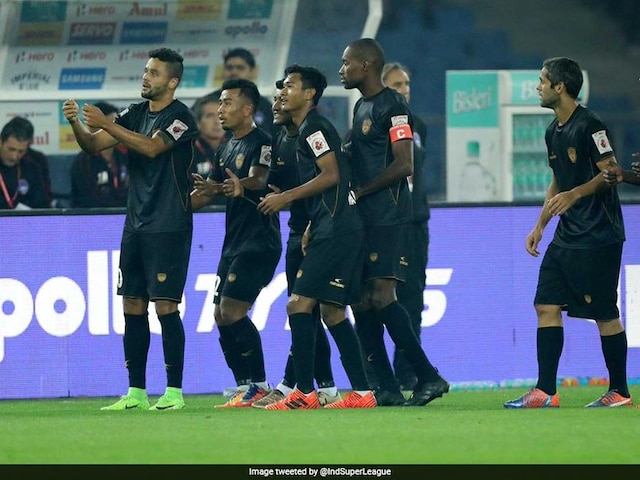 NorthEast United pumped in two quick first half goals in the space of five minutes to beat Delhi Dynamos 2-0 and notch up their first win of the season in the Indian Super League football on Saturday. Brazilians Marcio Junior and Danilo Lopes Cezario scored in the 17th and 22nd minutes to give NorthEast their first full three points after a draw and a loss in their first two matches of the season. They now have four points from three matches. The Dynamos had a much better possession in the match but failed to convert the few chances that came their way in their first home match of the season as a sparse crowd made some noises on a chilly December night. They felt the absence of their Uruguayan attacking midfielder Matias Mirabaje who did not take the field today due to injury.

This was Dynamos' second consecutive loss after their 1-4 thrashing by Bengaluru FC on November 26. They now have just three points from three matches.

NorthEast, on the other hand, were able to convert the few chances they had while they took advantage of a goalkeeping howler by Albino Gomes to score the second goal.

They had drawn their first match against Jamshedpur FC 0-0 at home before losing to Chennaiyin FC 0- in Chennai in their second match.

The visiting side began the match at a frenetic pace and scored twice in the first half though the Dynamos had a far better possession of the ball.

NorthEast United's Brazilian striker Lopes Cezario had a fine effort at the Dynamos goal in the 10th minute as he pounced on a poor backpass by right back Pritam Kotal to his goalkeeper but the Brazillian striker could not keep his shot down as it flew over the crossbar.

But NorthEast did not have to wait for long in taking the lead with another Brazilian Marcio Junior bulging the Dynamos net in the 17th minute to the dismay of the crowd at the Jawaharlal Nehru Stadium.

The spadework of the goal was though done by Assamese player Holicharan Narzary who cut into the Dynamos defence with a sudden burst before sending a perfect low cross from the left edge of the box for Marcio to fire in with his right foot.

It was the first goal of the season for NorthEast as they have not scored in their first two matches.

Five minutes later, NorthEast doubled the lead with Cezario taking advantage of a goalkeeping howler. Dynamos kepeer Gomes goofed up in clearing the back-pass from Pratik Chowdhury. Gomes kicked into Danilo's path and the Brazilian easily slotted the ball into the net.

Jolted by the two quick goals, the Dyanamos pressed hard and in the 24th minute, Jeroen Lumu got a chance on the right after he was played through but his shot was kept away by the NorthEast goalkeeper T P Rehenesh.

Three minutes before the half time, Rehenesh again made another fantastic save as he denied Dynamos captain Kalu Uche from scoring. As Jereon Lumu took a low corner kick for the Lions, his ball reached Uche who tapped in the delivery but an alert Rehenesh blocked the shot.

The Dynamos dominated the second half and went all out, desperately seeking for goals which did not come. They had the best chance to make it 2-1 in the 65th minute but substitute David Ngaihte wasted it.

Ngaihte, who came in for an off-colour Pritam Kotal in the 62nd minute, found himself in a one-on-one position with NorthEast goalkepeer Rehenesh three minutes after taking the field. But he delayed his shot which allowed the goalkeeper to narrow down the angle and when he took the shot at last, it hit straight to Rehenesh.

Comments
Topics mentioned in this article
Delhi Dynamos FC NorthEast United FC Indian Super League Football
Get the latest Cricket news, check out the India cricket schedule, Cricket live score . Like us on Facebook or follow us on Twitter for more sports updates. You can also download the NDTV Cricket app for Android or iOS.