After this game, Mumbai City and ATK are placed at fourth and sixth spots respectively. 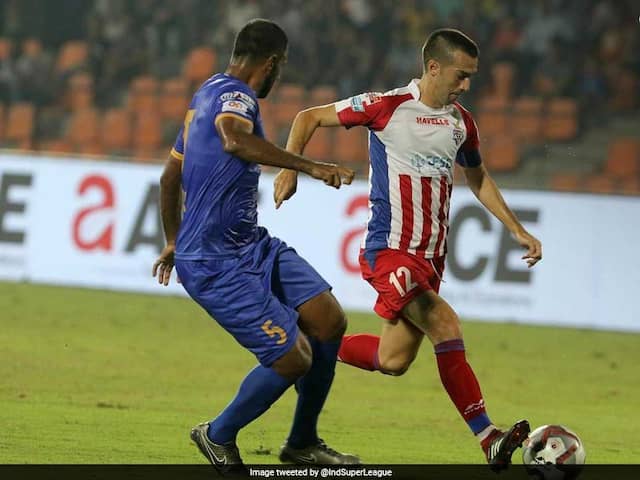 Mumbai City FC and ATK played out only the second goalless draw this season.© Twitter

Mumbai City FC and ATK played out a goalless draw in an Indian Super League (ISL) encounter at the Mumbai Football Arena on Saturday. In what turned out to be a lukewarm battle, neither team fashioned enough chances to deserve all three points and played out only the second goalless draw this season. After this game, both Mumbai City and ATK remain at their respective positions at fourth and sixth spot respectively. The first chance of the match fell for the visitors when Everton Santos got behind the Mumbai defence and pulled it back for Komal Thatal inside the box. However, the youngster miscued his shot altogether with only Amrinder Singh to beat in goal.

The home side saw a lot of the ball but struggled to create any openings. For ATK, Santos looked threatening each time he was on the ball. However, Mumbai did well defensively to thwart ATK from making inroads.

For ATK, Ricky Lallawmawma ensured that the dangerous Arnold Issoko was kept under check as the Congolese hardly had any impact in the first half.

It was a half where both teams were ineffective in the final third as neither goalkeeper was tested.

Mumbai City did come out with intent at the start of the second half and forced a couple of chances. In the 49th minute, Rafael Bastos found Paulo Machado after getting on the end of a cross from Issoko. But Machado's effort was blocked away.

Bastos then shot over from a promising position before Machado miscued his effort following a quick counter-attack.

The pace of the game slowed down as the half wore on as clear-cut chances came at a premium. In the 78th minute, Amrinder Singh was forced into action to keep out Manuel Lanzarote's on-target free-kick.

Subhasish Bose then called Arindam Bhattacharya into action with a belter from distance that the ATK goalkeeper had to parry over the bar.

Lanzarote was then left frustrated three minutes later after his appeals for a penalty after being taken down inside the box by Sehnaj Singh fell on deaf ears.

But that was about it as far as chances went as the teams settled for a point.

Atletico de Kolkata Indian Super League Football
Get the latest updates on IPL 2020, check out the IPL Schedule for 2020 and Indian Premier League (IPL) Cricket live score . Like us on Facebook or follow us on Twitter for more sports updates. You can also download the NDTV Cricket app for Android or iOS.