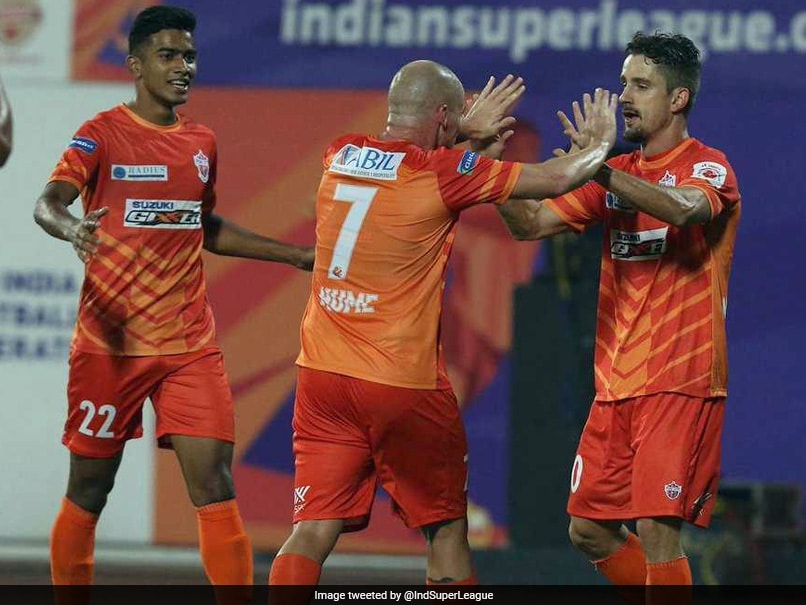 FC Pune City have climbed to the seventh spot with their second consecutive win.© Twitter

FC Pune City continued with their resurgence as they produced a spirited display to register a 2-0 win over FC Goa in an Indian Super League (ISL) clash at the Shri Shiv Chhatrapati Sports Complex Stadium on Tuesday. A terrific striker from Marcelinho in the 74th minute and a late penalty from Marko Stankovic (90+4') separated the two sides as Pune kept consecutive clean sheets. With only one point from three previous games, FC Goa's struggles after the international break in November continued and they find themselves in the fourth spot with 17 points.

Pune, meanwhile, have climbed to the seventh spot with their second consecutive win, and more importantly avenged their 2-4 hammering in Goa when interim coach Pradyum Reddy had just taken charge.

Goa dominated possession in the early stages of the game as Pune willingly dropped deep and set themselves up for quick counters. Hugo Boumous initiated a good move in the 12th minute as he picked out Seriton Fernandes' run on the right flank.

The full-back returned the favour with a cross into the centre but Boumous, who got on the end of it, sent his effort wide.

Pune had an excellent chance to take the lead in the 17th minute when Iain Hume's long diagonal over the top for Marcelinho caught Goa's defence off-guard. Seriton tracked back and nicked the ball off the Brazilian with a last-ditch tackle.

With the match turning out to be an end-to-end affair, Goa threatened again in the 22nd minute. Edu Bedia's lob allowed Brandon Fernandes to dribble into the box and force a good save from Kamaljit Singh.

With three minutes left for the end of the first half, Mandar Rao Dessai's cut-back from the left found Ferran Corominas in the centre of the box and the forward laid the ball off for Edu to send a powerful effort that hit the crossbar.

Goa pulled the strings again after the break but Pune had no plans to sit back despite Goa's dominance. In the 55th minute, Ashique Kuruniyan sneaked towards the byline and chipped a good cross for Nim Dorjee Tamang whose close-range header was parried away by Mohammad Nawaz.

Ahmed Jahouh took it upon himself to take the Pune defence out of the equation with a swerving strike from outside the box in the 70th minute but Kamaljit produced an exceptional save to tip the ball away.

A minute later, Mourtada Fall's failure to clear the ball allowed Marcelinho to dribble into the box at the other end but the Brazilian forward's shot was brilliantly saved by Nawaz.

The Brazilian worked his magic to give Pune the lead in the 74th minute. Sarthak Golui's pass found Marcelinho in space outside the box and the latter unleashed a beautiful curling strike that kissed the back of the net.

Jahouh hit the post with a similarly outstanding effort at the other end two minutes later as Goa sought an equaliser.

Despite Goa pouring forward in attack, Pune held them off well and won a penalty late on when Marko Stankovic was held by Mohammed Ali. The midfielder stepped up and converted from 12 yards to seal a hard-fought victory for Pune City.

FC Goa Indian Super League Football
Get the latest updates on IPL Auction 2023 and check out  IPL 2023 and Live Cricket Score. Like us on Facebook or follow us on Twitter for more sports updates. You can also download the NDTV Cricket app for Android or iOS.