Bengaluru FC continued to be third in the Indian Super League table. 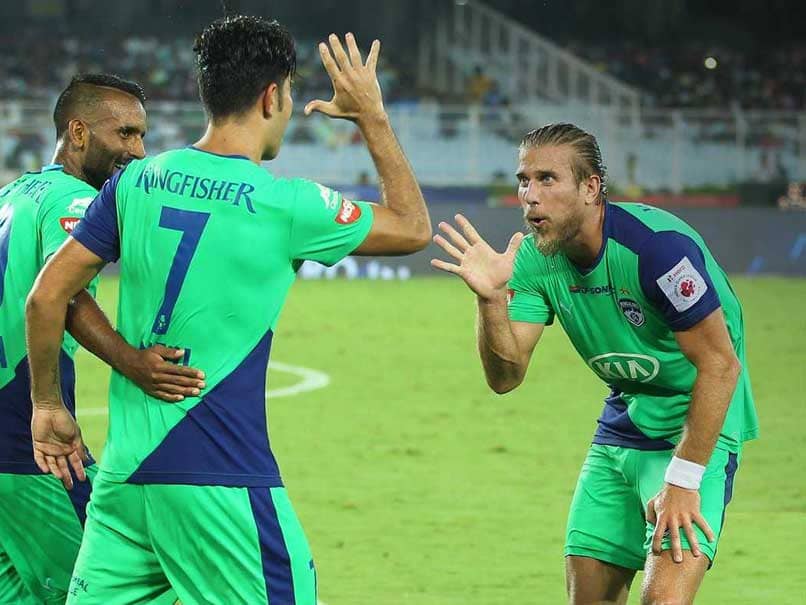 Bengaluru FC came from behind to beat ATK 2-1 and continue their unbeaten run in the Indian Super League 2018 at the Vivekananda Yuba Bharati Krirangan in Kolkata on Wednesday. Komal Thatal's first-ever ISL goal in the 15th minute gave ATK an early lead. However, a goal from Miku in the stoppage time of the first half and Erik Paartalu's second-half goal ensured Bengaluru a win. By virtue of this win, Bengaluru continued to be third in the ISL 2018 table. ATK, on the other hand, slumped to their third loss of the season and now find themselves placed fifth with seven points from six matches.

Both the team took time to get off the blocks before Thatal, who was part of India's U-17 World Cup team, scored the opening goal of the match.

Everton's Santos was the architect with a sumptuous through-ball from midfield which Thatal controlled and shot past Bengaluru FC's Gurpreet Singh Sandhu.

After taking the lead, ATK sat deep and defended resolutely as Bengaluru strived for the equaliser.

Miku should have restored parity five minutes later when Nishu picked him out with a cross from the left. However, the Venezuelan's thumping header was straight at Arindam Bhattacharya who parried it instinctively.

Steve Coppell's side looked well organised in defence following that and were looking to counter-attack while Bengaluru saw most of their attacks break down in the final third.

However, ATK were dealt with a blow when striker Kalu Uche was forced to go off after picking up a groin injury.

At the stroke of half-time, Gerson Vieira committed a foul on Miku right outside the penalty box.

Miku rolled the free-kick to Dimas Delgado before finding the top corner of Arindam Bhattacharya's near post with a brilliant finish to level for Bengaluru FC.

Bengaluru continued their momentum into the second half and took the lead within two minutes.

Delgado's free-kick into the box was headed out by Ricky Lallawmawma. But it fell to Paartalu whose venomous half-volley could not be kept out by Arindam Bhattacharya.

Bengaluru kept possession and frustrated the home team, who lacked a focal point in attack. However, Manuel Lanzarote did fashion a couple of opportunities with his guile and passing ability but to no avail.

In the final 10 minutes, ATK ramped up the pressure on Bengaluru and almost had an equaliser when Gerson Vieira hit the base of the post with a header from a corner kick.

That was the closest the two-time champions came to another goal as the Blues saw off the late surge with relative ease.

Atletico de Kolkata Indian Super League Football
Get the latest updates on IPL 2020, check out the IPL Schedule for 2020 and Indian Premier League (IPL) Cricket live score . Like us on Facebook or follow us on Twitter for more sports updates. You can also download the NDTV Cricket app for Android or iOS.