Bengaluru FC secured a 1-0 win over Hyderabad FC thanks to Nishu Kumar's early strike and a penalty save by Gurpreet Singh Sandhu. 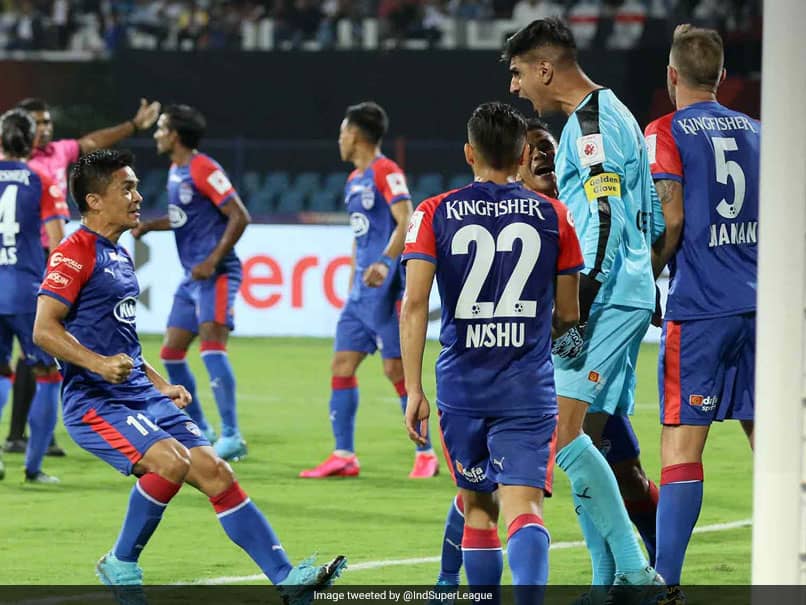 Bengaluru FC secured a narrow 1-0 win against Hyderabad to keep pace with the top spot aspirants in the Indian Super League (ISL) at the Kanteerava Stadium here on Thursday. Nishu Kumar's seventh minute strike turned out to be enough for the hosts to claim full points as Hyderabad failed to convert multiple chances including a penalty strike. The Blues are now second in the standings with 28 points from 15 games, while Hyderabad continued their woeful run and remain bottom of the table.

Nishu Kumar provided Bengaluru a stunning opening goal. Dimas Delgado's corner delivery from the right towards the edge of the box was met with a ferocious volley that sent the ball into the back of the net.

Hyderabad were alert to the situation and looked to get back into the game immediately. Nikhil Poojary cut in from the right flank and with the Bengaluru defence opting not to press, the winger produced a curling effort that missed the frame of the goal by inches.

The visitors were allowed their major opening in the 23rd minute when Suresh Singh fouled Marcelinho inside the box. Gurpreet Singh Sandhu became the Blues' hero in goal as he kept out Marko Stankovic's penalty attempt towards the bottom left corner and then saved the rebound by Bobo.

Bengaluru missed another chance to double their lead soon after the restart. With both teams looking to make inroads into their respective final third, a simple pass from Juanan was flicked into the path of Udanta by Khabra. The Hyderabad defence failed to properly clear the ball and it fell for Brown who couldn't get a shot away in time before Hyderabad goalkeeper Laxmikant Kattimani made the save.

Brown had another chance to score in the 55th minute when he cut in from the left but from a one-on-one scenario, Kattimani rushed off his line and made himself big to deny the striker.

The Blues took control of the game in midfield and denied the visitors space to operate as the second-half wore on.

New Bengaluru signing Nili Perdomo could have scored on his debut after coming on as a substitute, only to see the goalpost deny him twice in quick succession.

Bengaluru were almost left to rue those misses when Hyderabad substitute Liston Colaco entered the box after a lovely one-two with Adil Khan, but his shot from point-blank range was tipped away spectacularly by Gurpreet, helping his side clinch all three points.

Hyderabad FC Gurpreet Singh Football
Get the latest updates on IPL 2020, check out the IPL Schedule for 2020 and Indian Premier League (IPL) Cricket live score . Like us on Facebook or follow us on Twitter for more sports updates. You can also download the NDTV Cricket app for Android or iOS.