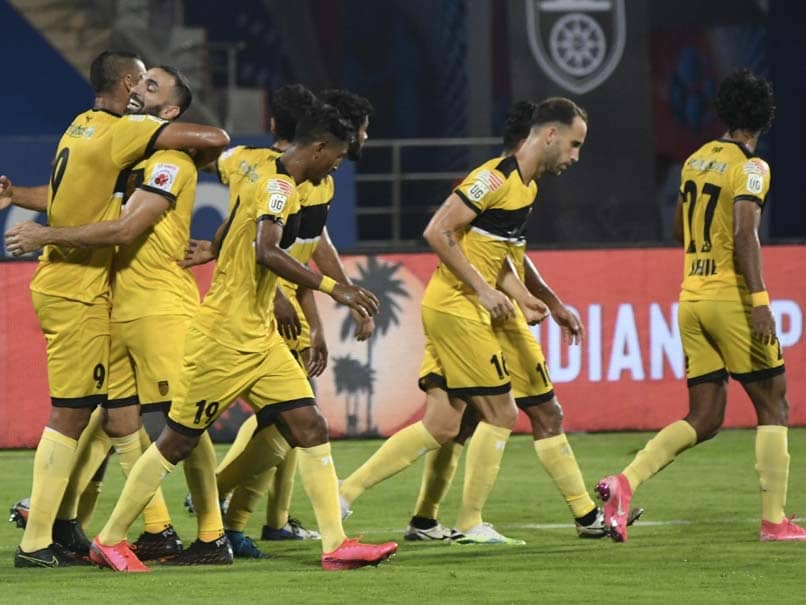 ISL 2020-21: Hyderabad FC started their season with a win over Odisha FC.© ISL

Hyderabad FC began their Indian Super League campaign with a 1-0 win over Odisha FC at the GMC Stadium in Goa on Monday. Debutant Aridane Santana (35'') netted a penalty that proved to be the difference between the two sides as Hyderabad kept their first-ever clean sheet in the league. Hyderabad were all over Odisha's territory in the opening minutes of the game, forcing their opponents to play deep. They won a series of corners in the first 10 minutes and nearly capitalised for a goal.

The Nizams' first real chance arrived in the 6th minute when Lluis Sastre whipped a perfect delivery into the box but Santana failed to direct his header towards goal.

That the visitors had worked on their set-pieces was evident. A smartly-executed corner in the 10th minute saw Akash Mishra force Odisha goalkeeper Arshdeep Singh into a save.

Odisha looked to play their normal game, maintaining possession and carrying the fight to their opponents. But they were a little too predictable and Hyderabad's defenders were able to deal with them without too much discomfort.

After constant probing, Hyderabad got their reward in the form of a penalty. Santana played Halicharan Narzary clear on goal, and his effort was handled by Odisha skipper Steven Taylor. Santana kept his composure and slotted home in the 35th minute.

Hyderabad keeper Subrata Paul had to wait until the 40th minute to make his first save, thwarting Odisha striker Manuel Onwu. The Nizams had chances to extend their lead but the outstanding custodian made a couple of good saves just before the breather.

Minutes after the restart, Odisha had their best opportunity to restore parity. But Nandhakumar Sekar's poor first touch allowed Mishra to make a crucial goal-saving tackle.

At the hour mark, Odisha had yet another chance. Diego Mauricio ghosted past his marker and squared a pass into the area to Onwu, whose low shot was kept out by Paul.

Hyderabad almost doubled the lead from a set-piece but Joao Victor's goal was rightly ruled offside.

Liston Colaco, who constantly troubled the Odisha defence, almost produced a moment of magic in the 67th minute, when he dribbled from the half-way mark into the box but was unable to find the finish.

In the end, though, the misses did not matter, as Hyderabad held on for the win.

Odisha FC Indian Super League Football
Get the latest updates on India vs Australia Series, check out the India vs Australia Schedule for 2020-21 and Ind vs Aus live score . Like us on Facebook or follow us on Twitter for more sports updates. You can also download the NDTV Cricket app for Android or iOS.