Alessandro Del Piero, who spent two seasons with Sydney FC at the end of a glittering, 19-year career with Italian giants Juventus, signed for the Delhi Dynamos for the duration of the glitzy 10-week long Indian Super League which got underway last week. 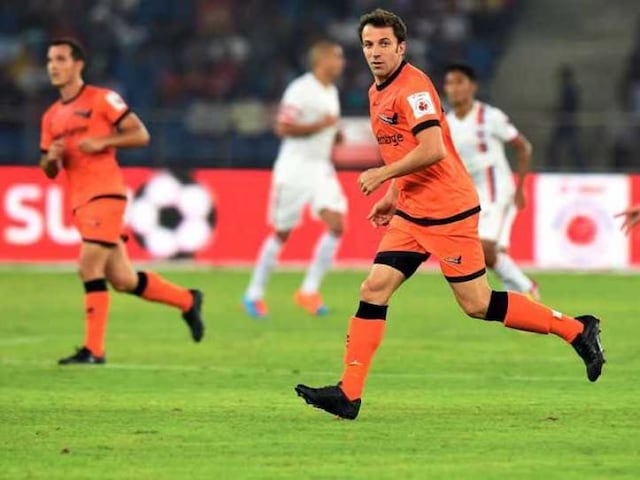 Del Piero (R) in action during the ISL game vs Pune.© AFP
Milan:

Former Juventus striker Alessandro Del Piero has admitted his pride at being part of the fledgling Indian Super League and its potential to help develop grass roots football.

Del Piero, who spent two seasons with Sydney FC at the end of a glittering, 19-year career with the Italian giants, signed for the Delhi Dynamos for the duration of the glitzy 10-week long ISL which got underway last week.

While the 2006 World Cup winner did not rule out a future coaching role once he hangs up his boots, Del Piero said he is "proud" to be part of a series which he believes offers real opporunities to young Indian footballers.

"I'm proud of the role played by this new League," Del Piero said in an interview with Gazzetta dello Sport daily on Sunday.

"In India they don't have youth academies and the concept of a tournament similar to the World Cup, with a game almost daily for three months, is a huge incentive for grass roots football.

"It is also a way for sport to offer hope in places where opportunities are often eclipsed by other problems. That's not bad, as objectives go.

"The local players can improve a lot and I try to teach them a little every day. It's really satisfying seeing them grow and seeing the concentration and gratitude in their eyes. It's a great feeling."

Del Piero became the highest-paid player to ever play in Australia when he signed a two-year deal with Sydney FC in 2012 that was worth approximately AUS $3.5 million ($3million) a season.

His recent move to India has prompted questions over Del Piero's next destination, although the 39-year-old insists he is currently watching how his fellow former Italy team-mates have evolved.

"Up until a few years ago I would have said no (to coaching). Now I can see how fascinating it can be, although it's not a priority," he added.

"It's curious for me to see the paths of (Filippo) Inzaghi, (Gennaro) Gattuso, (Fabio) Cannavaro, (Marco) Materazzi, (Gianluca) Zambrotta and even (Fabio) Grosso with the (Italy team) youth players.

"I have to work out which role suits me best, but there's time for that."

Comments
Topics mentioned in this article
Alessandro Del Piero Delhi Dynamos FC Juventus Indian Super League Football
Get the latest Cricket news, check out the India cricket schedule, Cricket live score . Like us on Facebook or follow us on Twitter for more sports updates. You can also download the NDTV Cricket app for Android or iOS.