Manchester United, who have confirmed they are close to re-signing former player Paul Pogba from Juventus, open their Premier League campaign at Bournemouth next Sunday 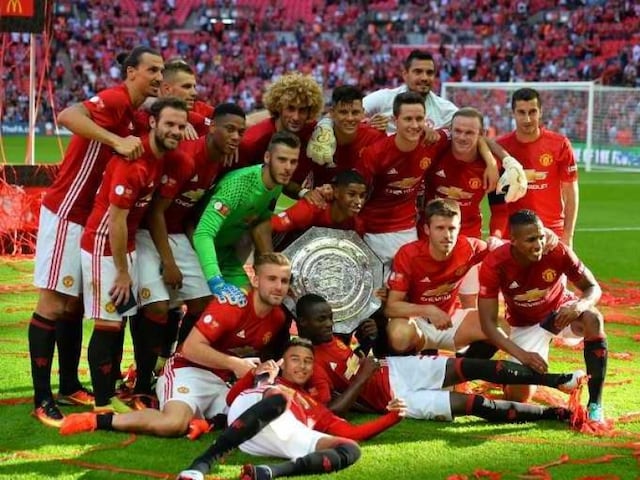 Manchester United players pose with the Community Shield during the trophy presentation.© AFP

Zlatan Ibrahimovic announced his arrival in English football with an 83rd-minute winner as Manchester United edged Leicester City 2-1 at Wembley on Sunday to win the Community Shield.

The former Paris Saint-Germain striker had had a quiet game, but he outjumped Wes Morgan to head home Antonio Valencia's cross to earn Jose Mourinho his first piece of silverware as United manager.

United, who have confirmed they are close to re-signing former player Paul Pogba from Juventus, open their Premier League campaign at Bournemouth next Sunday.

While his side came up short, he will have been encouraged by the brightness of their display, three months on from their 5,000-1 Premier League triumph.

They launch their league title defence at Hull City on Saturday.

Mourinho deployed his new-look strike partnership of Wayne Rooney and Ibrahimovic and both players made their presence felt in Leicester's penalty area early on.

Rooney headed straight at Kasper Schmeichel from Luke Shaw's cross and the Leicester goalkeeper was also obliged to field a hooked Fellaini shot after Ibrahimovic had leapt to win a high ball.

Leicester attacked the game with the intensity that characterised last season's title triumph and procured several chances of their own.

With Ibrahimovic and Rooney both dropping deep, United lacked an attacking focal point, but in the 32nd minute Lingard took matters into his own hands.

After eluding the sliding Andy King, he drove towards goal, slipped the ball beneath Leicester captain Morgan's sprawling challenge and confidently tucked a shot past Schmeichel.

It came at the same end as Lingard's spectacular extra-time winner against Crystal Palace in May's FA Cup final.

Ranieri introduced Ahmed Musa and Demarai Gray at half-time and the former played a big role in Leicester's 52nd-minute equaliser with an enterprising run from deep.

But the goal owed almost everything to a mistake by Fellaini, whose under-hit back-pass enabled Vardy to nip in, round David de Gea, and score.

Following a glut of changes by both sides, Musa squandered a chance to give Leicester victory when he headed Robert Huth's flick-on over the bar from point-blank range.

Within minutes Ibrahimovic had punished him, soaring above Morgan to meet Valencia's cross with a downward header that hit the left-hand post and bounced into the goal.

Henrikh Mkhitaryan made his official United debut as a stoppage-time substitute.

It was Mata who made way, having only entered the fray in the 63rd minute, and the Spaniard, frozen out by Mourinho during their time at Chelsea, exchanged angry words with the United manager as he came off.

Comments
Topics mentioned in this article
Manchester United Leicester City Zlatan Ibrahimovic Jamie Vardy Jesse Lingard Jose Mourinho Football
Get the latest Cricket news, check out the India cricket schedule, Cricket live score . Like us on Facebook or follow us on Twitter for more sports updates. You can also download the NDTV Cricket app for Android or iOS.