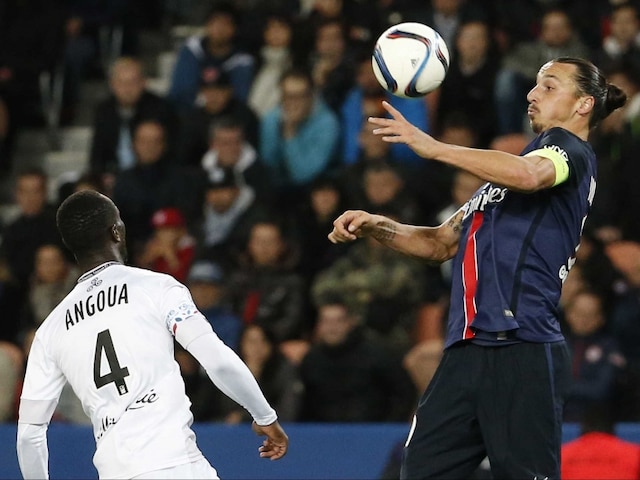 Before this match, Zlatan Ibrahimovic's last goal was against Guingamp last May.© AFP
Paris:

Zlatan Ibrahimovic ended his goal drought as Paris Saint-Germain extended their unbeaten start to the Ligue 1 season on Tuesday with a 3-0 victory at home to Guingamp. (Swedes' Love for Zlatan Ibrahimovic Unshaken)

Ibrahimovic, who hadn't scored since claiming a brace in a 6-0 win over Guingamp last May, added a third late on but also had a penalty saved as the reigning champions provisionally moved four points clear at the top of the table.

"In the first half we had some chances without dominating a very compact Guingamp. In the second half it was obviously better," PSG coach Laurent Blanc said afterwards.

"As for Ibrahimovic, just like the rest of the team, he was full of intent and was much better with the ball in the second half.

"I found his movement much better than it was against Reims. He's still lacking that little something, but once he finds it he'll score more goals," added Blanc.

The Frenchman had defended his decision to rotate his squad in successive draws but the capital club were almost at full strength on Tuesday with the exception of rested duo Thiago Silva and Marco Verratti.

Edinson Cavani, whose league-leading fifth goal salvaged a point for PSG in Saturday's 1-1 draw at Reims, nearly added to his tally inside five minutes but Guingamp goalkeeper Jonas Lossl made a terrific stop to deny the Uruguayan.

Last season's 6-0 drubbing in the corresponding fixture prompted Guingamp coach Jocelyn Gourvennec to adopt a conservative approach with Jimmy Briand and Sloan Privat, both on target at the weekend in a 2-1 win over Gazelec Ajaccio, left on the bench.

But PSG needed just 18 minutes to break the deadlock as Ibrahimovic found Pastore in space and the Argentine glided towards the edge of the penalty area unchallenged before slotting a precise low finish out of the reach of Lossl.

Another chance fell to Ibrahimovic after a clever one-two with Cavani but this time the striker's deflected effort was palmed away well by Lossl.

Yannis Salibur's dipping long-range free-kick called PSG goalkeeper Kevin Trapp into action just before the break but the home side resumed their dominance after half-time.

First, Ibrahimovic had a thunderous free-kick fisted away by Lossl with the Swede again left frustrated as Laurent dos Santos rushed back to clear off the line after PSG's stand-in skipper had slipped the ball past Lossl from a tight angle.

It was a busy night for the Guingamp custodian as the Dane made another fine save to prevent Pastore from adding his second but Lossl was culpable as PSG did eventually double their advantage on 77 minutes.

Ibrahimovic cut in from the right and after his low drive was spilled by the visiting keeper, Di Maria was quickest to react to the rebound for his first Ligue 1 goal.

Di Maria then provided the pass for Ibrahimovic to score his first goal of the season with the Swede poking just inside the far post seven minutes from time.

Ibrahimovic could have added a fourth after Cavani was tripped by Salibur but he saw his spot-kick kept out by Lossl.

Earlier, Angers and Reims drew 0-0, leaving both sides still with just one defeat through their first seven matches.

Rennes and Saint-Etienne can both trim PSG's lead back to a single point when they visit Gazelec Ajaccio and Troyes respectively on Wednesday, while Lyon host Bastia and Marseille travel to Toulouse.

Comments
Topics mentioned in this article
Paris SG Zlatan Ibrahimovic Javier Pastore Football
Get the latest Cricket news, check out the India cricket schedule, Cricket live score . Like us on Facebook or follow us on Twitter for more sports updates. You can also download the NDTV Cricket app for Android or iOS.