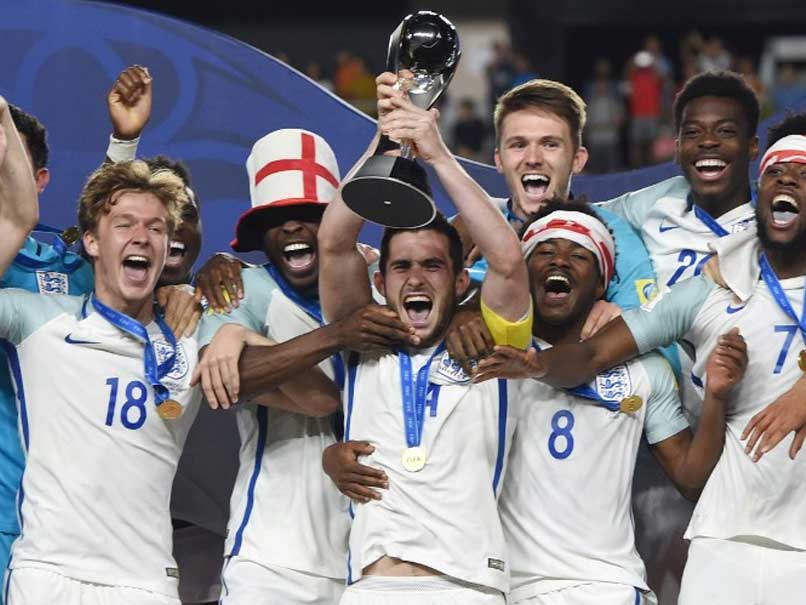 Dominic Calvert-Lewin scored and Freddie Woodman saved a penalty as England beat Venezuela 1-0 to win their first Under-20 World Cup title and end the nation's 51-year wait for a global trophy on Sunday. Everton striker Calvert-Lewin became the third England player to score in a World Cup final after Geoff Hurst and Martin Peters in 1966 -- the last time England won any world title. The Young Lions had to withstand a ferocious second-half onslaught with goalkeeper Woodman saving a penalty from Venezuela's Adalberto Penaranda 16 minutes from the end.

England had the better of the early exchanges with Liverpool-bound Dominic Solanke forcing a save from Wuilker Farinez and seeing a long-range effort go wide in the opening quarter of an hour.

Venezuela, who have never qualified for the senior World Cup, were making their first final appearance and took time to settle until Ronaldo Lucena's stunning free-kick hit the post in the 24th minute.

There seemed no danger as he prepared to take a free-kick from the edge of the centre circle but his fierce swerving drive took Woodman by surprise as it smashed into the post from fully 40 metres out.

Calvert-Lewin had already come close with a header when he scored what proved to be the winner in the 35th minute.

The striker rose to beat Nahuel Ferraresi to high ball on the edge of the box and saw his right-foot shot parried by Farinez.

He then made no mistake with his left foot from the rebound and slotted home at the near post.

Venezuela took control after half-time as England defended deep and tried to hit on the counter.

The tiny but lively substitute Yeferson Soteldo, who stands just 5ft 3in (160cm) tall, energised his side and immediately sent in Sergio Cordova to force a fine save from Woodman one-on-one.

England still had an attacking threat and Josh Onomah almost gave them a two-goal cushion when he ran unopposed to shoot from distance, only to see his shot cannon back off the crossbar.

Venezuela's increasing pressure finally paid off when Penaranda was brought down by Jake Clarke-Salter and the referee Bjorn Kuipers pointed to the spot, with his decision confirmed by video review.

Penaranda got up to take the spot-kick only to see his weak effort down the middle saved as Woodman flung a hand behind him as he dived to his right, and England held out for their long-awaited World Cup win.

Comments
Topics mentioned in this article
England Dominic Calvert-Lewin Football
Get the latest updates on ICC T20 Worldcup 2022 and CWG 2022 check out the Schedule, Live Score and Medals Tally. Like us on Facebook or follow us on Twitter for more sports updates. You can also download the NDTV Cricket app for Android or iOS.