World Cup qualifiers: England vs Montenegro in night of nerves

England's victory at Wembley Stadium will preserve their place at the top of Group H ahead of next week's final game at home to Poland but anything less could dash their hopes of qualifying automatically. 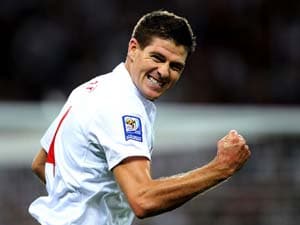 England's chances of securing automatic qualification for next year's World Cup in Brazil will be in the balance when they host Montenegro in their penultimate qualifying match on Friday.

Whereas victory at Wembley Stadium will preserve their place at the top of Group H ahead of next week's final game at home to Poland, anything less could dash their hopes of qualifying automatically.

England go into the game a point ahead of Ukraine and Montenegro, but should Roy Hodgson's men fail to win and the Ukrainians prevail at home to Poland, it is they who would take over at the summit.

With Ukraine completing their campaign away to perennial punching bags San Marino, who have lost all eight of their games, conceding 43 goals, such a scenario would almost certainly consign England to the play-offs, provided they were not pipped to second place by Montenegro.

An added source of concern for England is that, in their eight games to date, they have only managed to beat Moldova and San Marino, the pool's two weakest teams.

Their last meeting with Montenegro, in Podgorica in March, ended in a 1-1 draw and striker Wayne Rooney has urged his team-mates not to get flustered if they are unable to make an early breakthrough on Friday.

"They are organised and hard to beat, they put a lot of men behind the ball and try and contain you," said the Manchester United striker.

"We have to make sure we are patient and try to create the chances that could lead to us scoring goals.

England manager Hodgson has insisted that he is looking no further than his side's next two games, despite the looming possibility of a first major qualification failure since Euro 2008.

He can nonetheless take heart from the injury problems plaguing opposite number Branko Brnovic, who is expected to be without goalkeeper Mladen Bozovic, centre-back Marko Basa, midfielder Miodrag Pekovic and talismanic captain Mirko Vucinic, the Juventus forward. 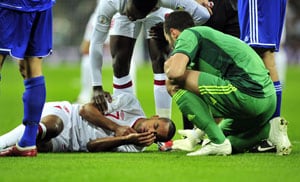 England have lost Ashley Cole and Theo Walcott to injury but are otherwise at full strength and Hodgson will be able to pair Rooney in attack with Liverpool's Daniel Sturridge for only the second time this year.

"The potential in that partnership is frightening," says captain Steven Gerrard.

"They are both very skilful, they can both create and they can both score. All the boxes are ticked. They just have to prove they can make it happen."

For once, Hodgson will not lack for striking options, with Tottenham Hotspur's Jermain Defoe, Rooney's United team-mate Danny Welbeck and new international Rickie Lambert also in the squad.

Midfielder Jack Wilshere, meanwhile, will hope to create more favourable headlines after being pictured with a cigarette in his mouth on a night out before becoming embroiled in a row about dual-nationality players.

With a home game against Moldova to follow their trip to London, Montenegro harbour realistic hopes of beating England to a play-off place, if not achieving automatic qualification as group winners.

Brnovic, whose side drew 1-1 away to Poland in their previous outing, believes his players possess the tools to pull off an upset.

"I think we can do it. Because we have the quality and I also think that this team plays much better away than home," he told the match programme.

"I believe that players do not need any special motivation for such games, because to play against the great England team at Wembley is something that every player dreams about, especially players from Montenegro.

"It's something that no-one ever dreamt to be possible, that such a small country could qualify for a World Cup.

"I believe this dream is on the verge of coming true, but we need to do the two matches properly to turn this dream into a reality."

Comments
Topics mentioned in this article
Udinese Arsenal Football Steven Gerrard Wayne Rooney Ashley Cole
Get the latest updates on ICC T20 Worldcup 2022 and CWG 2022 check out the Schedule, Live Score and Medals Tally. Like us on Facebook or follow us on Twitter for more sports updates. You can also download the NDTV Cricket app for Android or iOS.