Kalyan Chaubey on Friday won the election for the AIFF president's post. 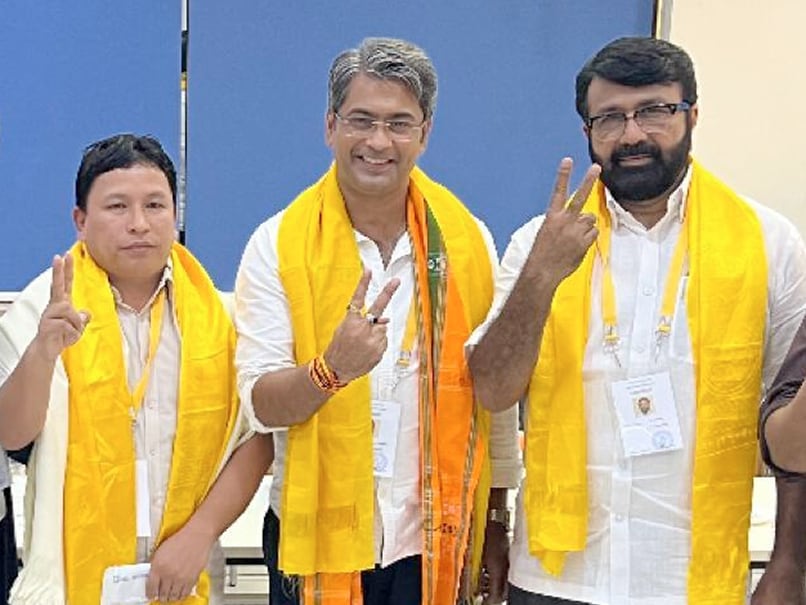 All India Football Federation's (AIFF) new president Kalyan Chaubey on Friday said he will not "sell dreams" like the country will play in the World Cup in eight years but will endeavour to bring improvement in the game from the current standard. Chaubey trounced the legendary Bhaichung Bhutia in the election for the top post as the AIFF got a former player as its president for the first time in its 85-year history. Thirty-three members of the electoral college voted for Chaubey while Bhutia got just one vote.

Addressing a press conference after his election as the new AIFF president, Chaubey said he will not make "unrealiseable promises".

"Hum aapke samne sapne bechne nahi aayenge. Ye nahi bolenge ki humne phalana academy bana diya and humne aat saal me World Cup khelenge (We will not come before you to sell dreams. We will not say that we have established so many academies and we will play in the World Cup in eight years).

"In my life I have taken part in the inauguration of more than 100 academies and in all these academies it has been said that the kids will play in the World Cup in eight years. But in reality it does not happen like this," he said.

"We are not making any promise but we will say we will take Indian football forward from the current condition and how much we will go forward will be worked out. We are not going to sell dreams."

Chaubey, a former goalkeeper for big clubs like Mohun Bagan and East Bengal, welcomed Bhutia in the executive committee as a co-opted member.

"The contribution made by Bhaichung Bhutia in Indian football, very few players have done so. We welcome him," Chaubey said.

Just after losing the presidential polls, Bhutia had said that he will be in the executive committee as co-opted member.

He said his committee will prepare a roadmap for Indian football in 100 days from now.

"I assure you that all the state associations will work together to take Indian football forward. In this regard, we will place before you our short term plan on September 7. After that, this committee will have its first formal meeting on September 17-18 in Kolkata.

"We have with us eminent players Shabbir Ali, I M Vijayan, Climax Lawrence and our two sisters (women players). Our state associations have their challenges and dreams. We will discuss all these and after 100 days will prepare a roadmap for Indian football," Bhutia said.

The 45-year-old BJP politician, Chaubey said FIFA president Gianni Infantino had called him up after his election as AIFF president and asked for a meeting.

"He said we can meet up in Doha, Zurich or Paris. I said I would want to meet you for sure but before that we will first discuss internally what we would ask from you. How we can take Indian football ahead technically and commercially, we will first understand this issue and we will meet you. He said 'excellent' and informed me that FIFA wants to work with India."

He said the new executive committee has some seasoned administrators as well as former stars.

"We have administrative expertise like we have seasoned administrators like Shaji Prabhakaran and former plater like I M Vijayan. It will take some time to take stock of the things in Indian football and after 100 days we will bring out the roadmap for Indian football."

Prabhakaran is tipped to be appointed as the General Secretary but no announcement was made on Friday. Sources, said an announcement may be made in a day or two.

"What the central or state governments can give you in terms of facilities and infrastructure we will try to understand it first. we will also speak to the government how we can implement grassroots development in schools, how youngsters of 6-12 years of age will play football. We want to associate with schools.

"What are our deficiencies and where we need to move ahead, whether we want only finance or capacity building, what kind of talent we need we will mention in the roadmap," Chaubey said.

"Through the medium of grassroots football and with the help of the schools we will reach up to one lakh children so that they can have the football basics ready."

Asked if there can be political interference in the working of AIFF, Chaubey shot back: "Can you name a federation in which the state or central government or a politician is not part of it?"

Asked why he was not proposed or seconded by his home state association West Bengal, he said, "This question should be asked to Bengal. But I assume since Subrata Dutta being senior vice president (in the earlier AIFF executive committee) he was one of the probable candidates as president. So they reserve that post for him.

"I was fortunate enough to get nominated from Gujarat. I have been associated with Gujarat for nearly 10 months, travelled to some of the parts of Gujarat ... but my identity is first as a football player that nobody will deny."