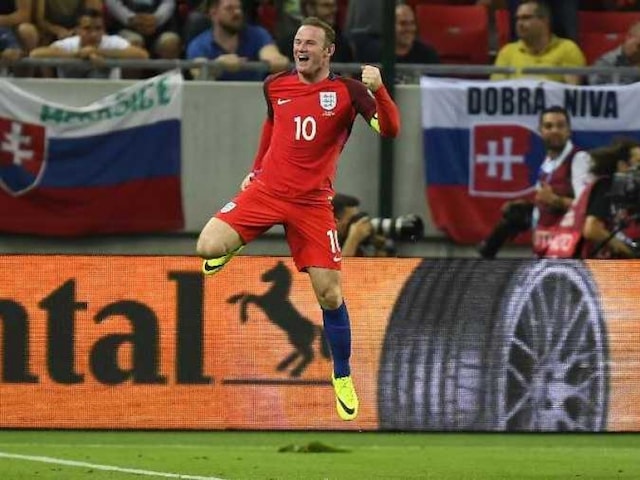 Wayne Rooney played as a deep-lying midfielder for most of the 2018 World Cup qualifier vs Slovakia.© AFP

Sam Allardyce vowed to defer to captain Wayne Rooney over his positioning after starting life as England manager with a last-gasp 1-0 win over Slovakia in 2018 World Cup qualifying.

Adam Lallana snatched a 95th-minute winner against 10-man Slovakia in Trnava on Sunday to prevent Allardyce from becoming the first England manager since Bobby Robson in 1982 not to win his first game.

Rooney, making a record 116th appearance for an England outfield player, adopted a deep-lying midfield role for much of the game despite Allardyce having said he would play in a number 10 position.

But Allardyce said: "This is the most decorated outfield player in England. He's won everything at Man United, more or less, and at Champions League and domestic level.

"So using his experience with a team, and playing as a team member, it's not for me to say where he's going to play.

"It's up to me to (ask): 'Are you playing well in that position? And if you are playing well and contributing, that's great.'

"Yes, I'd like him to get forward a bit more. He's been a goalscorer all his life and I want him still to score goals, but he reads a game as he reads it.

"I must admit, he did play a little deeper than I thought he'd play. But I was pleased with his performance."

Rooney, 30, started the game in midfield alongside Jordan Henderson in a 4-1-4-1 system.

He pushed up into a more orthodox number 10 role at half-time, only to retreat to a midfield holding role after Allardyce sent on Dele Alli for Henderson.

Rooney, England's captain, has been playing as a number 10 for Manchester United this season and Allardyce indicated prior to Sunday's game that he would use him in a similar role.

Adding to the confusion, Rooney himself told ITV he had played "where Sam wanted me to play".

England dominated possession against a stubbornly unadventurous Slovakia team, but it took the 57th-minute dismissal of Martin Skrtel for the visitors to take control.

Skrtel, the former Liverpool centre-back, was booked in the second half for catching Harry Kane with a flailing arm and saw red after stamping on the same player's calf.

Lallana hit the post and substitute Theo Walcott had a goal ruled out for offside as Slovakia threatened to pull off a repeat of their 0-0 draw against England at Euro 2016.

But with the last kick of the game, Lallana aimed a left-foot shot towards the near post and Slovakia goalkeeper Matus Kozacik could not prevent the ball squirming beneath him and trickling over the line.

Allardyce, who succeeded Roy Hodgson after Euro 2016, said the winning goal was "richly deserved", but admitted it had come as a "huge relief".

Slovakia coach Jan Kozak felt his team's display had set the tone for the rest of their Group F campaign.

"If you want to be successful, you need to leave everything on the pitch," he said.

"We, as a team, have the character and the enthusiasm. But the opposition were very tough.

"England are a good team, but they had fewer chances here than they did in the Euros. It was only when we went a man down that they created more."

Allardyce, meanwhile, revealed an unlikely source of inspiration during his post-match press conference when he showed reporters a "lucky coin" he had been given before the game.

"A father and his son, who was in a wheelchair, came to the hotel this morning and said: 'Is it OK if you have a picture with my son?" he said.

"When we finished, he said: 'Here's a lucky coin for you.' So I said: 'Thank you very much.' In the end we had a little bit of luck and we won, so it'll stay with me."

Comments
Topics mentioned in this article
England Slovakia Wayne Rooney Dele Alli Jordan Henderson Harry Kane Adam Lallana Football
Get the latest Cricket news, check out the India cricket schedule, Cricket live score . Like us on Facebook or follow us on Twitter for more sports updates. You can also download the NDTV Cricket app for Android or iOS.