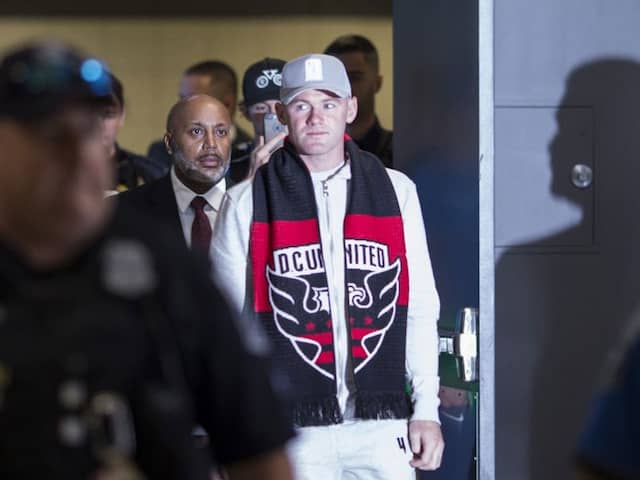 Wayne Rooney is Manchester United's and England's all-time record goalscorer, a Champions League winner and a five-time Premier League champion but rarely has a player of his stature divided opinion so starkly. Despite his trophy-laden CV, Rooney departs for DC United in Major League Soccer with a curious sense of a talent not quite fulfilled -- a feeling that his career has not lived up to the early hype. Born in Croxteth, Liverpool, Rooney fulfilled a childhood dream by breaking through the ranks at Everton. He quickly earned a reputation as the most talented teenager in English football, announcing his arrival with a sensational strike to beat then-champions Arsenal five days before his 17th birthday.

International recognition soon followed and when Rooney scored four times in the group stages of Euro 2004, England had a new national hero.

But the teenager limped off midway through the first half of England's quarter-final against Portugal after suffering a broken bone in his foot.

Without him, England suffered another heartbreaking exit on penalties and, rather than acting as a springboard, that was as close as Rooney ever came to winning an international tournament.

His performances in Portugal did, though, help earn him seal a £27 million ($37 million) move to Manchester United weeks later.

"I think we have got the best young player this country has seen in the past 30 years," said United boss Alex Ferguson on the day he splashed out a then world record fee for a teenager.

'Pitbull'
Rooney soon started paying that fee back, scoring a hat-trick on debut in the Champions League against Fenerbahce.

It took until his third season at Old Trafford to win the Premier League, by which point Rooney had struck up a deadly partnership with Cristiano Ronaldo.

"He was the kid of England, everyone loved him," Ronaldo told the BBC after Rooney broke Bobby Charlton's England goalscoring record in 2015.

"He was so powerful I was calling him 'Pitbull.' The power of Wayne Rooney is his mentality and strength and he never stops."

Ronaldo, who won  yet another Champions League final for Real Madrid last month and has now led Portugal into the knockout rounds at the World Cup, is still performing at the top level but Rooney's unselfishness helped the Portuguese establish himself as a world star.

"Wayne would say: 'I want to be the world's best but I'll do it by being a team player'," said former United defender and team-mate of Rooney and Ronaldo, Rio Ferdinand.

"He was playing left wing-half the time when Ronaldo was there for the last couple of years to cover full-backs.

"He would do that with no questions asked. There are not a lot of players with Wayne Rooney's profile who would have accepted that type of decision."

Rooney's most prolific seasons came once Ronaldo departed, scoring 34 goals in both 2009/10 and 2011/12. He also won two more league titles and reached the Champions League final again, only for United to be outclassed once more by Barca in 2011 despite a Rooney goal in the final at Wembley.

Fallen hero
However, his hero status with the United fans was damaged by two requests to leave the club before being handed lucrative contract extensions.

Rooney's solitary World Cup goal could not prevent England's elimination in Brazil 2014 after just two of their three group games and the last of his 53 England goals came from the penalty spot in a humiliating Euro 2016 exit to Iceland.

He retired from international football a year later, shortly after sealing a return to his beloved Everton, but only after also surpassing Charlton as United's top scorer with 253 goals in a 13-year career.

His Goodison return did not prove the fairytale ending Rooney had hoped for.

On the pitch, Everton's struggles saw Ronald Koeman sacked just two months into the campaign and Rooney's playing time was limited under Sam Allardyce. Off the field, he pleaded guilty to drink-driving in September.

Now he has become just the latest member of what was once labelled England's "golden generation" to cash in on interest from MLS following in the footsteps of David Beckham, Steven Gerrard and Frank Lampard for a final hurrah Stateside.

(This story has not been edited by NDTV staff and is auto-generated from a syndicated feed.)
Comments
Topics mentioned in this article
Football

Manchester United Wayne Rooney English Premier League
Get the latest updates on IPL 2020, check out the IPL Schedule for 2020 and Indian Premier League (IPL) Cricket live score . Like us on Facebook or follow us on Twitter for more sports updates. You can also download the NDTV Cricket app for Android or iOS.