A French Ligue 1 match between Nice and Marseille descended into absolute chaos after fans of the home side invaded the pitch and angrily confronted opposition players. 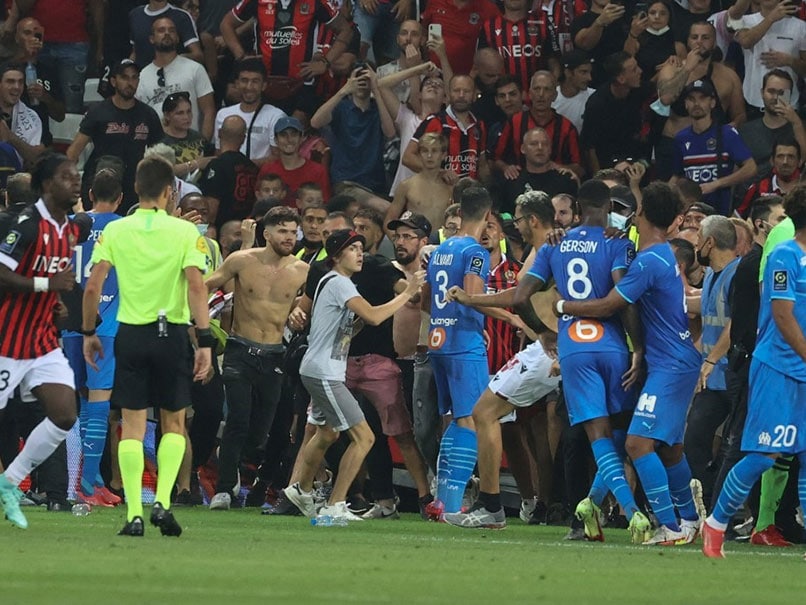 The video of the ugly scenes at the Allianz Riviera Stadium went viral on social media.© AFP

A French Ligue 1 match between Nice and Marseille descended into absolute chaos and had to be abandoned. It all started with Nice fans started throwing bottles at the opposition players. Marseille and French star Dimitri Payet returned the favour by tossing a bottle back at the crowd in the stadium. That only infuriated the home fans more who then made their way onto the pitch. A security cordon of stewards, dressed in yellow vests, tried to stop the fans from getting on the pitch before a brawl broke out between players of the two teams, supporters and staff.

The video of the ugly scenes at the Allianz Riviera Stadium went viral on social media:

Marseille eventually refused to restart the match with club officials claiming their players' safety could not be guaranteed.

"The decision was taken by the authorities to resume the match, but Marseille do not want to," Nice president Jean-Pierre Rivere told broadcaster Prime Video.

"The referee was with us, he confirmed to  Jorge Sampaoli and me that safety was not guaranteed and decided to stop the game."

Marseille Dimitri Payet Football
Get the latest updates on SA vs IND 2021-22, check out the Schedule and Live Score . Like us on Facebook or follow us on Twitter for more sports updates. You can also download the NDTV Cricket app for Android or iOS.