Mirko Vucinic's extra-time strike sent Juventus into their first Italian Cup final since 2004 following a 2-2 draw with AC Milan on Tuesday, giving them a 4-3 aggregate victory. 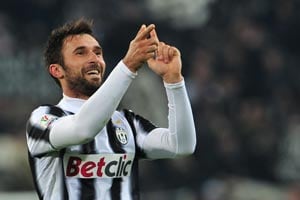 Mirko Vucinic's extra-time strike sent Juventus into their first Italian Cup final since 2004 following a 2-2 draw with AC Milan on Tuesday, giving them a 4-3 aggregate victory.

Milan had forced extra-time by leading 2-1 after 90 minutes but ultimately paid for their semi-final, first leg defeat at home last month.

Veteran Alessandro Del Piero had given Juve a first-half lead but second period goals from Djamel Mesbah, his first for Milan, and Maxi Lopez forced the extra period.

Vucinic's goal ensured Juve still have not been beaten this season in 32 games, although they would have lost had the match ended after 90 minutes.

It meant first blood to Juve against the team against whom they're also fighting for the Serie A title.

"I'm delighted for tonight, as much for my goal as for qualification.

"We're here fighting on both fronts and we'll fight to the end."

Milan coach Massimiliano Allegri said his side had lost it in the first leg.

"I'm happy with the performance, the lads played well," he said.

"It was a good game, I'm disappointed we haven't reached the final after a game like this because the lads did everything.

"I'm disappointed to go out in this way but we were compromised already from the San Siro result."

They certainly made the early running but created little of any danger.

Zlatan Ibrahimovic hit a cross-cum-shot with little power that seemed to surprise Marco Storari in the Juve goal, but he pushed it away.

The only moment of true quality in the first half came from the hosts and resulted in the deadlock being broken.

Andrea Pirlo chipped the ball down the right for the overlapping Stephan Lichsteiner, who centred for Del Piero to nip in front of Marco Amelia, dink it over the 'keeper and slot into the empty net.

Allegri seemed almost to throw in the towel at half time and start to look to future league commitments as he removed star player Ibrahimovic and thrust on Maxi Lopez, although he later revealed his top scorer had a back problem.

However, Milan hit back in surprising fashion as centre-back Philippe Mexes launched a long ball over the defence and full-back Mesbah lost his marker Simone Pepe to send a diving header into the top corner, leaving Storari helpless.

Vucinic, who was having one of his more dazzling days, lacked a finish as he waltzed into the area but hit the side-netting with his shot.

But Allegri was proved right nine minutes from time as Maxi Lopez brilliantly held off Giorgio Chiellini on the edge of the box, turned his man, beat Leonardo Bonucci with quick feet and fired, with limited backlift, an unstoppable shot into the top corner.

Former Milan player Marco Borriello should have won it for Juve late on but having beaten the offside trap to run onto Emanuele Giaccherini's through ball, he first stumbled, losing the opportunity to shoot with his favoured left, and then shot weakly with his right, allowing Amelia to save easily.

The hosts could have buried the tie in the first few minutes of extra-time but Milan somehow survived.

Amelia saved from Borriello and Claudio Marchisio then sent the follow-up off target with the goal gaping.

Vucinic hit a stunning reverse pass to put Giaccherini in one-on-one but Amelia timed his dive at the forward's feet to perfection.

Martin Caceres's shot was then deflected off target but on 96 minutes Vucinic finally found the net with a rocket from distance into the top corner.

Milan pushed late on but couldn't find the grandstand finish they needed.