Barcelona thrashed Real Sociedad 5-1 on Sunday with two goals from Lionel Messi and one each for Carles Puyol, Pedro Rodriguez and David Villa, in his first game back after eight months out with injury. 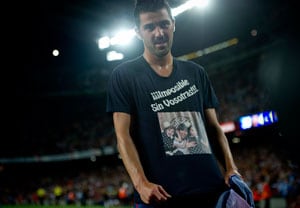 Barcelona thrashed Real Sociedad 5-1 on Sunday with two goals from Lionel Messi and one each for Carles Puyol, Pedro Rodriguez and David Villa, in his first game back after eight months out with injury.

The victory at Camp Nou came after champions Real Madrid started their title defence with a 1-1 draw at home to Valencia.

Barca's La Liga opener under new coach Tito Vilanova saw them 4-1 ahead by half-time with Messi in sparkling form.

"I'm not sure what I will remember in the future about my debut. There were many things, the first 15 minutes we were strong and scored three goals and the appearance of David (Villa) and his goal were all very positive," said Vilanova who hasd succeeded Pep Guardiola at the Barcelona helm.

Puyol powered home a header from a corner on two minutes before Chori Castro finished off a sweeping move to level for the away team.

However, Barcelona were too strong and ran out easy winners.

Messi added a double in four minutes to kill off the opposition, his first coming when he squeezed past two defenders to power home.

For his second he latched on to a loose ball to hit home and he nearly had three within six minutes when a header went just high.

Barca were enjoying up to 80 percent of possession and their passing play paid off on the stroke of half-time when Cesc Fabregas and Jonathen Tello combined to provide for Pedro to finish well.

Barca took their foot off the gas in the second-half, perhaps with one eye on the Spanish Super Cup game with Real Madrid on Thursday.

However the introduction of Villa on 75 minutes brought the crowd to its feet and he only had to wait nine minutes to get his reward, finishing off an Andres Iniesta pass.

Real Madrid's title defence got off to a stuttering start when they dropped two crucial home points in a 1-1 draw with Valencia on a hot Sunday night in the Spanish capital.

Gonzalo Higuain put Real ahead on nine minutes before Jonas Goncalves equalised just before the interval for a plucky Valencia side.

"I expected more from my team, last season when we drew 0-0 the best player for Valencia was Guaita (the Valencia keeper) and today it has been Alves. We did not play a great game but we did enough to win," said Real boss Jose Mourinho.

When Angel Di Maria went close on four minutes from long range it seemed that Madrid had never been away.

Indeed they looked to be coasting when they took the lead five minutes later.

Di Maria took advantage of a very high Valencia defensive line to float a perfect pass through to Higuain who found himself alone in front of Diego Alves in the Valencia goal.

He had so much time that the Valencia bench were convinced he was in an offside position and he saw two shots blocked by the Brazilian before finally converting at the third attempt to grab Madrid's first goal of the season.

Xabi Alonso then went close with a right-footed drive on 25 minutes and Fabio Coentrao almost made it 2-0, 10 minutes later.

Attacking sorties were so rare for Valencia that it was completely out of the blue when the equaliser came on 41 minutes.

Tino Costa floated a free-kick towards the home team's penalty spot and Jonas emerged out of a group of players to head home.

The Brazilian midfielder's brave attempt to reach the ball was timed so well that Real goalkeeper Iker Casillas and defender Pepe collided in mid-air and needed five minutes of treatment before the game could restart.

Also on Sunday, Athletic Bilbao crashed 5-3 at home to Real Betis for whom Ruben Castro, Jorge Molina and Benat Extebarria got first-half goals.

Oscar de Marcos and a Mikel San Jose double levelled the game for Bilbao in a second-half fightback but Betis continued to look dangerous on the break and Alejandro Pozuelo and a second for Molina took the points back to Seville.

The match was played in a subdued atmosphere with Bilbao coach Marcelo Bielsa leaving out two key members of his squad, Fernando Llorente and Javi Martinez, whose futures at the club remain uncertain.

Comments
Topics mentioned in this article
Football Arsenal Carles Puyol Real Madrid Real Sociedad Pedro David Villa Lionel Messi Barcelona Gonzalo Higuain
Get the latest updates on ICC T20 Worldcup 2022 and CWG 2022 check out the Schedule, Live Score and Medals Tally. Like us on Facebook or follow us on Twitter for more sports updates. You can also download the NDTV Cricket app for Android or iOS.