Spain avoided Italy, the dangerous floater that none of the tournament's six highest seeds wanted in the round-robin stage, but it still has no victory assured against its fellow Group D opponents. 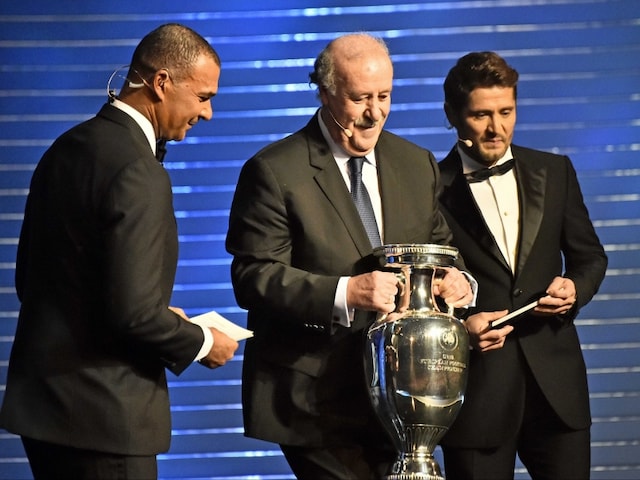 Former Dutch footballer Ruud Gullit and former French defender Bixente Lizarazu (right) stand next to Spain's coach Vicente Del Bosque (centre) as he arrives with the trophy before the final draw of the UEFA Euro 2016 football tournament in Paris.© AFP

Spain's quest for a third consecutive European Football Championship got more complicated when they were drawn in a challenging group with Croatia, the Czech Republic and Turkey. (Read More in Football)

La Roja avoided Italy, the dangerous floater that none of the tournament's six highest seeds wanted in the round-robin stage, but it still has no victory assured against its fellow Group D opponents, reports Efe.

Spain will take on the Czech Republic in their opener on June 13 in Toulouse, followed by a clash against Turkey on June 17 in Nice and finally a match versus Croatia in Bordeaux on June 21.

"We've seen in the past that some of these opponents have made things tough for us. It's a group that's more difficult than I'd expected. I thought it would be easier. I won't rate the other groups, but what concerns me is ours and it doesn't seem like it'll be a smooth ride at all," he told reporters.

Host nation France were drawn with Romania, Albania and Switzerland in Group A, while Group B consists of England, Russia, Slovakia and Wales and Group C is made up of Germany, Ukraine, Poland and Northern Ireland.

Italy were drawn into Group E along with Belgium, Ireland and Sweden, while Group F comprises Portugal, Iceland, Austria and Hungary.

Comments
Topics mentioned in this article
Spain Italy Romania England Football
Get the latest updates on IPL 2020, check out the IPL Schedule for 2020 and Indian Premier League (IPL) Cricket live score . Like us on Facebook or follow us on Twitter for more sports updates. You can also download the NDTV Cricket app for Android or iOS.