If Bayern Munich succeed in knocking titleholders Inter Milan out of the Champions League it will spark a day of rejoicing at the Bavarian giants, coach Louis van Gaal said on Monday. 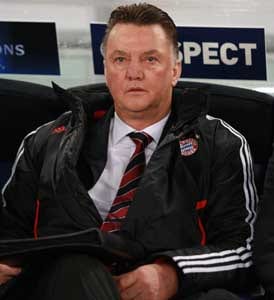 If Bayern Munich succeed in knocking titleholders Inter Milan out of the Champions League it will spark a day of rejoicing at the Bavarian giants, coach Louis van Gaal said on Monday.

Van Gaal's men go into Tuesday's last 16 tie at their Allianz Arena as favourites after taking the first leg in Milan 1-0, but despite that advantage van Gaal sounded a note of caution.

"My team have regained their confidence (after hammering Hamburg 6-0 in the league on Saturday).

"But Inter are difficult rivals, we have to pay attention.

"From a statistical point of view we're favourites because I believe only one team has managed to qualify for the quarter-finals after losing their first leg 1-0 at home.

"If we eliminate the European champions it will be a day of rejoicing for everyone, for me and for the club."

Asked at the eve of match press conference whether he would stay on if he guided Bayern to the Champions League title, van Gaal replied: "We've made a decision with the management, we're going to divorce (at the end of the season), because we've got different philosophies and we don't want to continue our association in this climate.

"It's a super club, without doubt the best organised in the world, we have the best conditions.

"Every manager would like to work in these conditions, for sure I'm sad not to be able to continue my work at the head of this club and with this extraordinary group of players."

Comments
Topics mentioned in this article
Football Inter Milan Bayern Munchen
Get the latest updates on ICC T20 Worldcup 2022 and CWG 2022 check out the Schedule, Live Score and Medals Tally. Like us on Facebook or follow us on Twitter for more sports updates. You can also download the NDTV Cricket app for Android or iOS.