European football's governing body on Friday said it had fined Italy forward Antonio Cassano for homophobic comments he made during a news conference at Euro 2012. 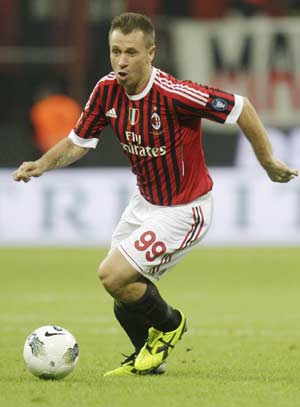 European football's governing body on Friday said it had fined Italy forward Antonio Cassano for homophobic comments he made during a news conference at Euro 2012.

UEFA said in a statement on its website that it had fined the striker 15,000 euros ($18,400, £11,700) fine for a "discriminatory press statement" during the tournament, without referring to the words he used.

Cassano caused outrage among gay rights campaigners after a news conference on June 12 during which he used a derogatory word to describe homosexuals and said that he hoped there were no gay players in the Italian national team.

Homosexuality in sport and particularly football is a sensitive issue.

There are no high-profile openly gay footballers in the major European leagues and many gay rights groups have called for someone to take a stand and become the first.

UEFA said AC Milan forward Cassano can appeal against the fine within three days of receiving a formal written confirmation of the sanction.

Comments
Topics mentioned in this article
Italy Football AC Milan Alou Diarra Lech Poznan Antonio Cassano
Get the latest updates on India vs Australia Series, check out the India vs Australia Schedule for 2020-21 and Ind vs Aus live score . Like us on Facebook or follow us on Twitter for more sports updates. You can also download the NDTV Cricket app for Android or iOS.