Tim Cahill was recalled to the Australian squad on Wednesday for next month's friendly against Lebanon and World Cup qualifier against Jordan. 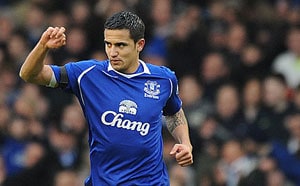 Tim Cahill was recalled to the Australian squad on Wednesday for next month's friendly against Lebanon and World Cup qualifier against Jordan.

The former Everton star joined the New York Red Bulls last month and indicated he did not want to be considered for Socceroos friendlies until he had settled into his new life.

But coach Holger Osieck included him in his 22-man squad to face Lebanon in a friendly in Beirut on September 6 and for their 2014 World Cup qualifier against Jordan in Amman five days later.

Austrian-based midfielder James Holland gets his first call-up since March while goalkeeper Mark Schwarzer is poised to become the first Australian to win 100 caps, should he take the field.

Australia are currently third in Group B in final Asian World Cup qualifying with two points from two games, the same as Iraq. Japan are top on seven points from three matches.

Comments
Topics mentioned in this article
Football Australia Cricket Team Mark Schwarzer Tim Cahill Sunderland Australia Arsenal Everton
Get the latest updates on IPL 2020, check out the IPL Schedule for 2020 and Indian Premier League (IPL) Cricket live score . Like us on Facebook or follow us on Twitter for more sports updates. You can also download the NDTV Cricket app for Android or iOS.