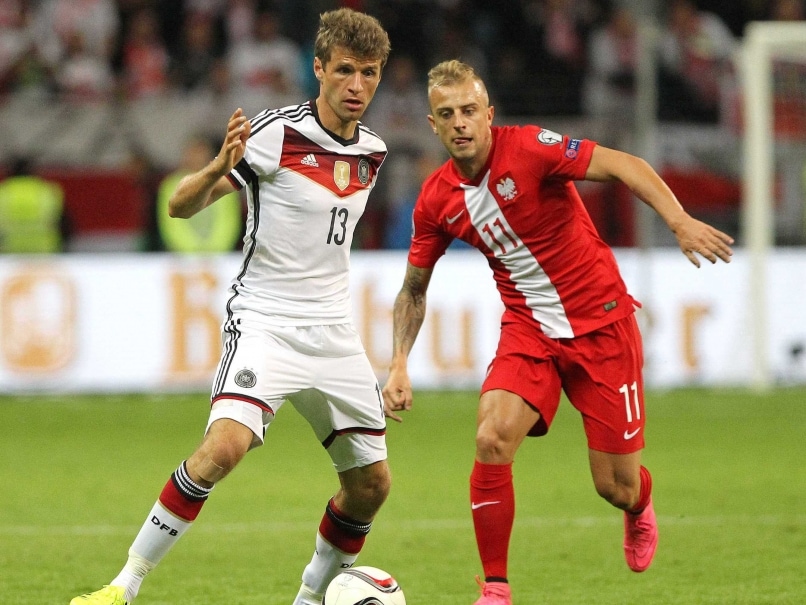 A double by Thomas Mueller ensured world champions Germany kept hold of top spot in Group D and moved to the verge of Euro 2016 qualification with a 3-2 defeat of a spirited Scotland side at Hampden on Monday. (Click here for latest football stories)

Mueller, who grabbed a double in the corresponding fixture in Dortmund last year, opened the scoring in the 18th minute.

In full flow the Germans appeared unplayable as Scotland struggled for possession.

Mueller headed Germany back in front seven minutes later before James McArthur restored parity for a second time with a sensational strike in the 43rd minute.

Bayern Munich star Mueller then turned provider for Ilkay Gundogan to put Germany ahead for the third time in the 54th minute.

Scotland now face a mammoth task to even claim a play-off place as they trail third-placed Ireland, who defeated Georgia 1-0, by four points with two games remaining.

Poland's 8-1 demolition of Gibraltar kept the Poles two points behind Germany in second.

Strachan praised the effort of his players despite the disappointment of having seen their hopes all but extinguished of reaching the finals.

"Whatever you think, over the two games, they've put in some amount of work," said Strachan, whose side lost 1-0 to Georgia last Friday.

"There is something inside them all that drives them on. They can be proud of their performances."

"This match was anything but easy for large stretches of the game but I think we largely controlled it and winning was well-deserved," the World Cup winning coach said.

At Hampden, Germany's total dominance of possession paid off when Mueller broke the deadlock.

The 25-year-old burst at pace at a terrified Scottish defence, before drilling a low shot that took a deflection off the heels of Russell Martin to leave David Marshall completely wrong-footed as it rolled into the bottom left-hand corner.

Scotland surprised the World Cup winners with an unlikely equaliser.

After Charlie Mulgrew was fouled by Emre Can on the edge of the box, Maloney whipped in a dangerous free-kick that Neuer failed to deal with as the keeper's flapped clearance went in off Hummels.

Marshall could only parry Can's shot and Mueller was alert enough to nod the rebound over the line despite Scotland's desperate efforts on the line.

Things looked ominous when Mario Goetze had the ball in the net for Germany again after collecting a pass on his chest before spinning to send a half-volley past Marshall but the flag was already up for offside.

Hampden erupted, however, as McArthur's sensational strike pegged Germany back for the second time. The Crystal Palace midfielder met Maloney's corner at the edge of the box to rifle a volley that Neuer got fingertips to.

Germany started the second half in menacing fashion and had the ball in the net again when the unmarked Goetze fired a Bastian Schweinsteiger pass past Marshall but the Bayern Munich forward was flagged for offside.

The Germans didn't have to wait long for their next opportunity and Gundogan soon made it 3-2.

Mueller turned provider as he cut the ball back from the byline perfectly for the Borussia Dortmund defender to slam home his shot in off the base of the post.

Comments
Topics mentioned in this article
Thomas Muller Germany Scotland Football
Get the latest updates on India vs England Series, India vs England , live score and IPL 2021 Auction . Like us on Facebook or follow us on Twitter for more sports updates. You can also download the NDTV Cricket app for Android or iOS.