John Terry believes the emergence of a young crop of international players augurs well for England's future but has rejected comparisons to the so-called "golden generation." 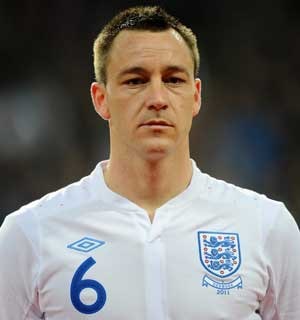 John Terry believes the emergence of a young crop of international players augurs well for England's future but has rejected comparisons to the so-called "golden generation."

Ten years ago this weekend England looked poised to usher in a bold new era under Sven-Goran Eriksson when a youthful side featuring the likes of Michael Owen, Steven Gerrard and David Beckham thrashed Germany 5-1 in Munich.

That result ultimately proved to be yet another false dawn for England however, as what had once appeared to be a potentially world-beating group of players endured serial disappointments in major tournaments.

Just over a year ago, English football hit rock bottom when Fabio Capello's side were dumped out of the 2010 World Cup by Germany, crashing to a 4-1 defeat after a string of abject displays in the group stage.

With the likes of Arsenal's Jack Wilshere (19) and Chelsea's Josh McEachran (18) waiting in the wings, there are signs that England's future may not be as bleak as it appeared after the humiliation in Bloemfontein 15 months ago.

Jones, Cleverley and Smalling are all part of the England squad for Friday's Euro 2012 qualifier against Bulgaria, and Welbeck and Wilshere would also have travelled had it not been for injury.

While England manager Capello was coy about whether any of Jones, Cleverley or Smalling would start, England captain Terry is convinced that the Manchester United trio would be ready if selected.

"They've come into the England set-up and felt very comfortable and very assured of themselves and rightly so," Terry said.

"They're huge talents, certainly for the present, and the future of the England team. They've got a lot to give.

"You don't get into the Man Utd side if you're not ready and they've shown that they are. I don't think age comes into it at all.

"You need to be given opportunities in life and if that comes around, good luck to them. They're certainly ready."

England are currently in pole position to qualify automatically from Group G, which they lead courtesy of a vastly superior goal difference from second placed Montenegro.

If England do reach next year's finals in Poland and Ukraine, Terry believes the side can travel to the tournament with confidence, offering a mix of experience and youth.

"If we do get ourselves to the Euros we can go there with some young players who have got an an awful lot of games under their belts, a little bit more experience and that mixture of the young and the old that we always speak about, and hopefully we can have a good tournament," Terry said.

"I don't want to get into that. We've been there and done that before," he said. "What we are looking at is a very good young squad of players coming through. It's great to see for English football all round."

Comments
Topics mentioned in this article
Blackburn Rovers Football England Cricket Team Australia Cricket Team West Indies Cricket Team Manchester United Phil Jones John Terry Chris Smalling Frank Lampard
Get the latest updates on India vs Australia Series, check out the India vs Australia Schedule for 2020-21 and Ind vs Aus live score . Like us on Facebook or follow us on Twitter for more sports updates. You can also download the NDTV Cricket app for Android or iOS.