Bastian Schweinsteiger made his final appearance Germany in their 2-0 friendly win at home to Finland. 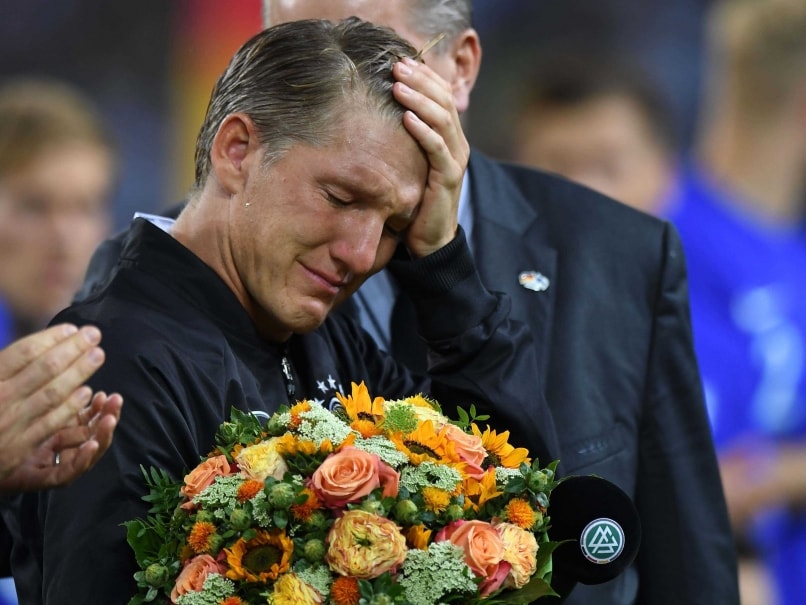 Bastian Schweinsteiger breaks down ahead of Germany's friendly against Finland.© AFP

Bastian Schweinsteiger let the tears flow on Wednesday as Germany's captain made his final appearance for die Mannschaft in their 2-0 friendly win at home to Finland.

Schalke's Max Meyer and Arsenal's Mesut Ozil scored Germany's second-half goals, but the night belonged to Schweinsteiger, who played the first 66 minutes in Moenchengladbach on his 121st -- and final -- international appearance.

"I think you all saw how it effected me. I had just wanted to enjoy every moment, but I hadn't expected it to be so lovely," admitted Schweinsteiger who was carried off after the final whistle by his team mates.

Twelve years since his debut, the 32-year-old announced his retirement at the start of August, but head coach Joachim Loew gave the Manchester United midfielder the chance to skipper his country one last time.

Even before kick-off, with German FA (DFB) president Reinhard Grindel heaping praise on the departing captain during a pre-match presentation, Schweinsteiger struggled to hold back the tears.

He gave up, sobbing openly when the 30,121-strong crowd, which just over half-filled Borussia Park stadium, gave him a standing ovation.

"I didn't think that would happen," Schweinsteiger admitted, referring to his tears, when handed a microphone.

"Thank you for coming, it means a lot to me.

"It was a huge honour for me to play for Germany and I just want to say 'thank you' for everything."

This was Schweinsteiger's first match of the season, having been banished to United's reserves by new coach Jose Mourinho earlier this month, but he has insisted he will not give up on his 'dream' to play for the Red Devils.

Loew fielded an experimental 3-1-3-3 formation, with Hoffenheim defender Niklas Suele making his debut, and Schweinsteiger was the sole starting survivor from the team which won the 2014 World Cup final.

The hosts had the better of the first-half chances.

Kevin Volland played the ball across the face of the Finnish goal on 24 minutes, but the chance went begging.

It remained goalless at the break, but there were worrying scenes for Arsenal fans when new-signing Shkodran Mustafi took a knock early in the second-half, but played on.

Goetze put in a cross, Volland stepped over the rolling ball to allow 20-year-old Mayer, who captained Germany to silver at the Rio de Janeiro Olympics, to slot his first senior goal on his second appearance for die Mannschaft.

The game was briefly halted with an hour gone when a fan, wearing a Germany shirt with 'Schweinsteiger' across the shoulders, ran onto the pitch, took a selfie with the World Cup winner and casually jogged off.

There was another standing ovation, but no tears this time, when Schweinsteiger came off for Julian Weigl on 66 minutes and embraced Loew on the sidelines.

He hugged each member of Germany's bench, including Manuel Neuer, who is tipped to replace him as captain with Loew set to announce his new skipper on Thursday.

Ozil came on and his shot spiralled in off the far post on 77 minutes as Germany warmed up for their opening 2018 World Cup qualifier away to Norway on Sunday.

Comments
Topics mentioned in this article
Bastian Schweinsteiger Germany Football
Get the latest updates on India vs Australia and check out  Schedule, Results and Live Score. Like us on Facebook or follow us on Twitter for more sports updates. You can also download the NDTV Cricket app for Android or iOS.