While no announcement was made on the terms of Eriksson's contract, reports suggest the well-travelled coach will be paid 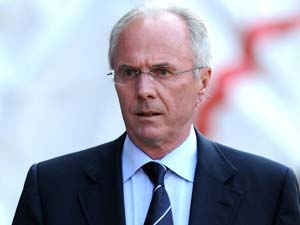 Eriksson, who stepped down as technical director of United Arab Emirates side Al Nasr on Sunday, joins Guangzhou on an 18-month deal, a club official said, without giving details of the Swede's salary.

"Following discussions, the executive board of the club have decided to hire Mr Sven-Goran Eriksson as Guangzhou R&F's chief coach from today until December 2014," an official said in an SMS to AFP.

While no announcement was made on the terms of Eriksson's contract, reports in Britain suggest the well-travelled coach will be paid £2m ($3m) a year by Guangzhou R&F, who are currently 13th in the 16-team Chinese Super League.

Eriksson has managed several of Europe's top domestic sides, winning the Italian league with Lazio in 2000 before taking the England manager's job a year later.

During five years in charge of the Three Lions he guided England to two World Cups and a European Championship, but failed to get past the quarter finals in any of the three tournaments.

Eriksson has since had spells with Mexico and Ivory Coast at international level and with Manchester City in the English Premier League.

During his management of Leicester City in 2010-11, he brought in Nigerian striker Yakubu Ayegbeni, who was signed by Guangzhou R&F last year.

The Guangzhou derby match, scheduled for August 25, will be one of the most hotly anticipated of the Chinese football season, pitting two former Serie A winning coaches against each other.

But Eriksson will find it hard to bring R&F out of the shadows of their hugely successful neighbours.

His arrival in China on Monday followed intense speculation that he was to become R&F boss after previous manager Brazilian Sergio Farias was sacked last month, following reports of player fall-outs.

Yakubu, the club's star player following successful spells with EPL sides Everton and Blackburn, was among those rumoured to have had deteriorating relationships with Farias.

Guangzhou R&F have previously been based in Shenyang and Changsha, under different names, and are now owned by Guangzhou R&F Properties.

China's top football sides are commonly owned by business titans who buy clubs before changing their names and often locations.