Bayern bounced back on their return to league duty at the Allianz Arena with goals by Mario Mandzukic and Mario Goetze before Swiss winger Xherdan Shaqiri added the third deep into added time. 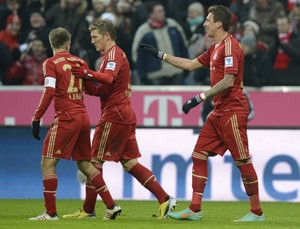 Bayern Munich bounced back from their midweek Manchester City defeat with a 3-1 win over Hamburg in the Bundesliga on Saturday, while Borussia Dortmund suffered a Champions League hangover.

Bayern slumped to their first defeat since July on Tuesday when they were beaten 3-2 at home to City, but still went through as group winners to the Champions League's last 16.

Bayern bounced back on their return to league duty at the Allianz Arena with goals by Mario Mandzukic and Mario Goetze before Swiss winger Xherdan Shaqiri added the third deep into added time.

The European champions have now played their final Bundesliga match of 2013 and jet off to Morocco for Tuesday's Club World Cup semi-final against China's Guangzhou Evergrande.

"The players had perhaps their holidays and Morocco in their heads," said coach Pep Guardiola as Bayern finished the calendar year with a record 93 Bundesliga points and unbeaten in the German league.

"We had a few problems in the second half, like we did against Manchester, we simply gave away too many balls. We have good players, but we have to stop such things happening."

Despite starting with winger Franck Ribery and left-back David Alaba on the bench, and with captain Philipp Lahm and star midfielder Bastian Schweinsteiger out injured, Bayern still started with 10 internationals.

Alaba's replacement Diego Contento was the only uncapped player in the Bayern side.

Mandzukic put the Bavarians ahead with his tenth goal of the season with 42 minutes gone when he headed home Rafinha's superbly volleyed cross after a long ball from Toni Kroos.

Goetze added the second when he hit the top left corner with 52 minutes on the clock before making way for Ribery.

Hamburg striker Pierre-Michel Lasogga celebrated his 22nd birthday on Sunday a day early with Hamburg's consolation goal on 87 minutes when he crashed his shot past Munich goalkeeper Manuel Neuer.

Shaqiri came off the bench to add a third just before the final whistle.

Having needed a dramatic late goal to beat Marseille on Wednesday to confirm their Champions League progress, Dortmund had to fight back from two-goals down to draw 2-2 at Hoffenheim to hold onto third place.

Striker Sven Schipplock and right-winger Kevin Volland gave Hoffenheim a shock 2-0 lead before Dortmund's Pierre-Emerick Aubameyang gave Borussia hope when he hit his ninth goal of the season just before the break.

Poland right-back Lukasz Piszczek scored his first goal of the season to equalise when he stabbed home a rebound after a curling Nuri Sahin cross.

The point was enough for Dortmund to hold onto third place as they sit level on 32 points with fourth-placed Borussia Moenchengladbach, who were held to a goalless draw at Mainz 05.

Wolfsburg enjoyed a 3-1 win at home to VfB Stuttgart as Swiss defender Ricardo Rodriguez and Brazilian Diego crashed in free-kicks before Croatia's Ivan Perisic added a third late on.

The victory keeps Wolfsburg fifth and closes the gap behind fourth-placed Borussia Moenchengladbach to three points, while Sruttgart stay tenth.

Nuremberg keep the tag of being the only team in a major European league without a win when they drew 3-3 at Hanover 96 as the hosts fought back with three goals in the final half an hour.

Senegal striker Mame Diouf scored Hanover's dramatic equaliser in the dying stages, with more than a hint of offside, to leave Nuremberg furious and second from bottom in the table.

Eintracht Braunschweig remained bolted to the bottom of the league when they went down 4-1 at Augsburg while on Friday, Werder Bremen crashed to a 3-2 defeat at Hertha Berlin, their fourth in five games.

Comments
Topics mentioned in this article
Football Shinji Okazaki Middlesbrough Bayern Munchen Manchester City Borussia Dortmund
Get the latest updates on ICC T20 Worldcup 2022, check out the Schedule and Live Score. Like us on Facebook or follow us on Twitter for more sports updates. You can also download the NDTV Cricket app for Android or iOS.