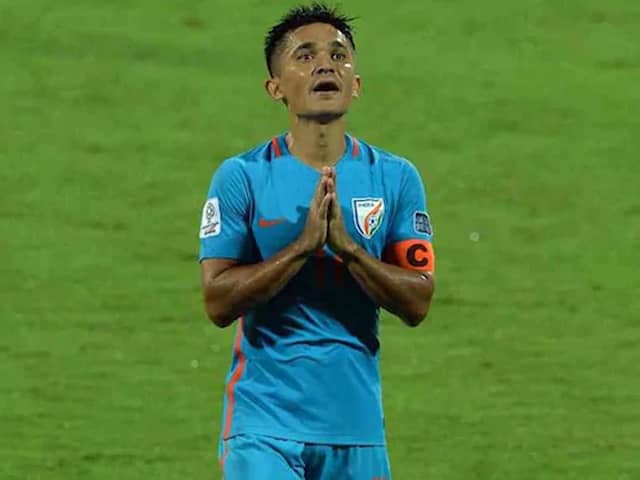 The Indian team was without a coach since January after Asian Cup.© AFP

A new season ahead and a new coach in charge, Sunil Chhetri is an excited man these days. The undisputed leader of Indian football, who will be joining the national camp in Delhi under newly-appointed coach Igor Stimac on Monday, is looking forward to win more games for India outside the country than on home turf. "I think the next long-term goal should be to qualify for the Asian Cup again," Chhetri told IANS when asked about what the target of the team should be going into the new season.

"That is not going to be easy because lots of things depend on the group you get, the qualifiers, the conditions... you can be unlucky also on several fronts. But that should be our target.

"And if you ask the short-term target, then because the boys are ready, we should try to win as many games as possible. We should win more games than we lose. Another target I have is to see we do well when we travel. Generally, we do well at home. Now having given a chance to play the King's Cup and play friendly games outside the country, we should try to rectify that and win more away games," he said.

Having achieved the target of qualifying for the Asian Cup last time, Chhetri is now confident about India dishing out a better performance in the coming season.

"Lots of young players in the team are now matured individuals that gives us hopes. Like Jeje (Lalpekhlua), Sandesh (Jhingan), Udanta (Singh), Gurpreet (Singh Sandhu), Pritam (Kotal), Thapa were youngsters four years back. Now they are all improved and experienced individuals as footballers.

"Some of them are still young in age but they know how to play international football. (Anirudh) Thapa, Subhasis (Bose) are not too old but have enough experience. Most of them have cemented their places in the national team. We are a much better team than we were before. With right guidance from the coach, we can surely do than what we did previously in the last five years," Chhetri said.

Jeje, however, is not part of the national camp as he is currently nursing an injury.

Asked what should be his expectations from the new coach, Igor Stimac, Chhetri said: "The major thing I want from the coach is to push ourselves. Of course you will want your coach to be tactically sound and knowledgeable and a good man manager.

"But the most important thing I want as a player and a captain is that the coach should be demanding. Once you know the coach had a vision and he is good, all the players rally behind him. This coach has a great pedigree. As a player he was amazing. As a coach also he has done decently well. So we all are looking forward to working with him," he said.

"You feel younger when you have a new coach in the camp. It is always challenging to see you have to go and prove again. He will not know who Sunil Chhetri is. For him, everyone is same. That's a nice thing," said the scorer of 67 international goals with a laugh.