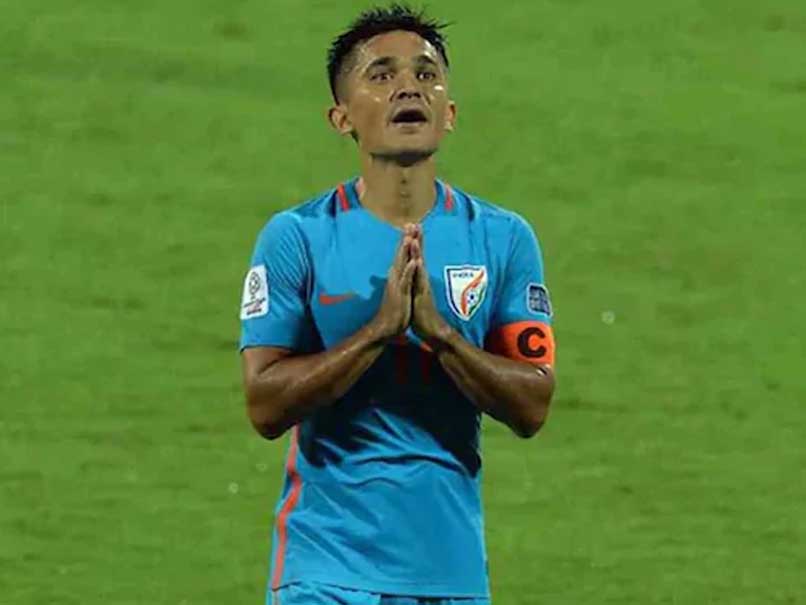 Sunil Chhetri has been named as AIFF Men's Footballer of the Year for a record-extending sixth time.© AFP

Talismanic Indian captain Sunil Chhetri was on Tuesday named as the AIFF Men's Footballer of the Year for a record-extending sixth time. The 34-year-old striker, who has been in peak form in the last couple of years, has earlier won the honour in 2007, 2011, 2013, 2014 and 2017. He currently plays for Bengaluru FC in the Indian Super League. Chhetri is currently the second highest international goal scorers among active players with 70 strikes to his name, behind Cristiano Ronaldo (149). He has gone past Lionel Messi (68), who is third in the list, during the 2019 Intercontinental Cup opener against Tajikistan. Chhetri is the most capped player of the country with 109 matches, ahead of former captain Bhaichung Bhutia (107).

"The fact that this was voted by the Hero I-League and Hero ISL coaches makes it all the more special. I am grateful to my club members, coaches, fellow players, the national team staff, and the fans for their support, love, and affection," Chhetri said.

On being reminded about winning the award for the sixth time, he added: "I never play for Awards. But yeah, it feels nice when your hard work gets recognised. This is an added motivation to do better."    India midfielder Abdul Samad was named the AIFF Emerging Men's Player of the Year.

Ace India international Ashalata Devi was named the AIFF Women's Footballer of the Year 2018-19, while Dangmei Grace was adjudged the AIFF Emerging Women's Footballer of the Year 2018-19.    Best Grassroots Development Programme award will be given to Jammu and Kashmir Football Association while R Venkatesh of Tamil Nadu won the award for the best referee.

(This story has not been edited by NDTV staff and is auto-generated from a syndicated feed.)
Comments
Topics mentioned in this article
Sunil Chhetri Football

India
Get the latest updates on India vs Australia Series, check out the India vs Australia Schedule for 2020-21 and Ind vs Aus live score . Like us on Facebook or follow us on Twitter for more sports updates. You can also download the NDTV Cricket app for Android or iOS.