AC Milan's third win of the season moved them up to provisional fifth place, four points behind leaders Juventus who host second-placed Roma in a top-of-the-table clash in Turin on Sunday. 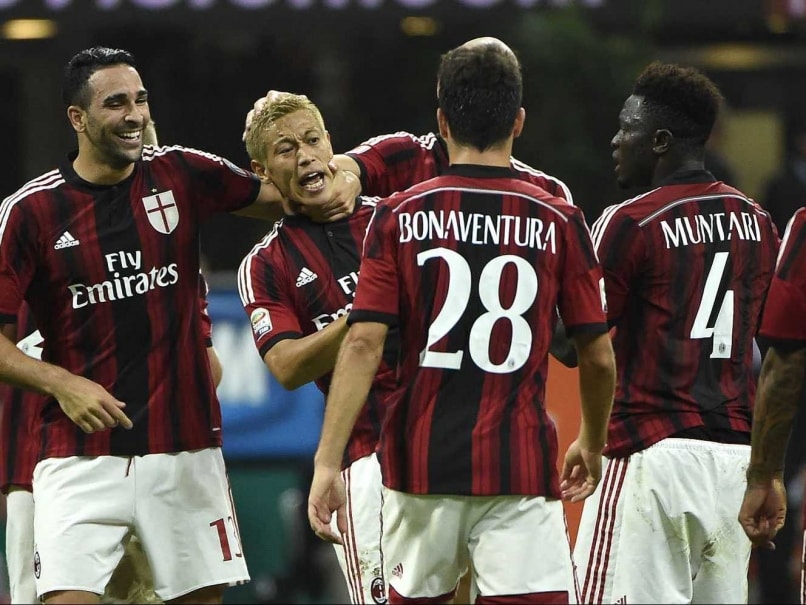 Japanese international Keisuke Honda scored a late free-kick to help seal the points for AC Milan in a 2-0 win over Chievo at the San Siro on Saturday as the Rossoneri ended their three-game winless run.

Milan hosted the Verona-based side looking to get back to winning ways after two successive draws, against Cesena and Empoli, and a 1-0 home defeat to Juventus last month.

A mis-hit volley from Sulley Muntari gave Milan the lead 10 minutes after the restart and as Chievo pressed for a late equaliser, Honda settled nerves with a well-struck curler which beat Chievo 'keeper Francesco Bardi at his near post in the 78th minute.

Milan's third win of the season moved them up to provisional fifth place, four points behind leaders Juventus who host second-placed Roma in a top-of-the-table clash in Turin on Sunday.

Having endured a mitigated first season at Milan, Honda has been on fire this season.

Milan coach Filippo Inzaghi hailed the Japan star, but admitted his side still have to work on limiting the threat of counter-attacks.

He added: "We still have to work on certain elements of our game. If you want to succeed, you can't afford to concede mistakes."

Television pictures appeared to show Chievo should have been awarded a penalty when Milan defender Alex fouled Maxi Lopez in the box, and Eugenio Corini lashed out: "It was a foul on Maxi, no doubt. It can be annoying when you're not given a penalty award.

"But we also had three or four chances that we didn't capitalise on."

Inzaghi gave Fernando Torres his full debut at the San Siro but it was a frustrating night for the former Chelsea striker, who was replaced by Stephan El Sharaawy with around 15 minutes remaining.

Torres saw an early chance go wide when his first-timer from Honda's lay-off came off the foot of Giacomo Bonaventura to sail just wide, but chances were few and far between for the Spaniard.

Milan finally found their rhythm after the opening quarter hour and Honda came close when he curled a left-foot shot wide of Bardi's near post.

Chievo pressed for the remainder of the half but ultimately failed to threaten Christian Abbiati in the Milan net.

Milan resumed in positive fashion after the interval and Bardi had to react quickly to Jeremy Menez's drive from a tight angle to the left of Chievo's goal.

Two minutes later, the 'keeper was left clutching at thin air when Honda set up Muntari for Milan's opener.

The 28-year-old's cross from the right of the area was headed out into the path of the Ghanaian international, whose mis-hit shot bounced up and over Bardi and into the back of the net.

Menez found space on 67 minutes to test Bardi with an angled drive which came off the 'keeper's face, and two minutes later a low angled drive from the Frenchman was blocked by Ervin Zukanovic and bounced into the path of Torres, who missed the target.

Chievo were given brief hope when Muntari was dispossessed in midfield but Dejan Lazarevic failed to capitalise despite having options to his right with Lopez lurking close to goal.

Torres' frustrating night ended when he made way for El Shaarawy, who made an almost immediate impact.

The Milan striker was brought down by Isaac Cofie while on a mazy run down the left, and Honda stepped up to send a precise free kick over the defensive wall and past Bardi to hit his fourth goal of the campaign.

Earlier, Greek international Panagiotis Tachtsidis struck late to secure a 1-0 win over visitors Cagliari and hand Verona their third win of the season.

Verona now sit sixth, four points behind leaders Juventus ahead of the rest of the weekend fixtures.

Comments
Topics mentioned in this article
AC Milan Sulley Muntari Keisuke Honda Football
Get the latest updates on ICC T20 Worldcup 2022, check out the Schedule and Live Score. Like us on Facebook or follow us on Twitter for more sports updates. You can also download the NDTV Cricket app for Android or iOS.