All the boys are from Kiev and this is only their second outing abroad. Hailing from conditions where current conditions are below 6 degrees celcius, playing in India is an experience in itself for them. 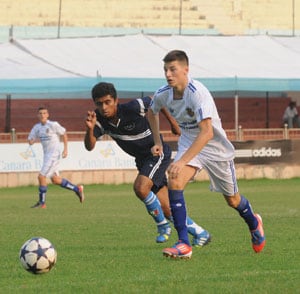 Troeschina School of Ukraine started their campaign in style with a 8-0 drubbing of PP Savani Chaitanya Vidhyalaya, Sankul, Gujarat in their opening match in the U-17 Boys' category at the 54th Subroto Cup here on Thursday.

The Ukraine team dominated proceeding from beginning to end, with Gujarat hardly getting a shot at the rival goal. Gomeniuk and Dmytro scored a hat-trick each for the winners.

Troeschina are the firm favourites to win the U-17 title, having won the UNICEF Cup in Spain recently. Most of the boys in the squad hail from economically disadvantaged backgrounds and their education and football training are taken care of by Troeschina.

All the boys are from Kiev and this is only their second outing abroad. Hailing from conditions where current conditions are below 6 degrees celsius, playing in India is an experience in itself for them.

The fact that they are yet to adjust to the local conditions was evident. In spite of that, their superiority in terms of technique and experience was too much for Gujarat.

"This was an easy match, but we cannot take any team lightly," coach Oleg Ivanshenko said after the match. "The biggest problem today was the weather.

"They were superior in height as well as technique. But my boys played well and it was a great learning experience," said Gujarat Coach Vinod Kantharia.

Meanwhile, tomorrow is a chance to create history for Betkuchi High School, Kamrup, Assam and Government Chawngfianga Middle School, Kolasib, Mizoram in the title clash of the U-14 Boys' category.

Although teams from Mizoram have won the title in the past, it is the first time that Chawngfianga School have entered the final. Assam, meanwhile, have never won the U-14 title and Betkuchi will be eager to script history. Betkuchi, in fact, are the first school from Assam to enter the final of the U-14 category.

In the girls' U-17 matches, NCC (NER) created a record of scoring the most number of goals in a single match in this edition by pumping in 21 against a hapless Fountainhead School, Surat, Gujarat. Roja led the way with seven goals while Sumita and Margeret scored four goals each.