In the first session, all the action was confined to Oman half and the visitors were forced to resort to desperate defending as the local lads took a formidable 4-0 lead by half-time. 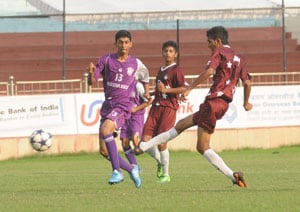 Government Model School, Chandigarh sealed a berth in the quarterfinals of the Under-17 boys' category of the 54th Subroto with a thumping 5-0 victory over an Indian School, Oman at the Ambedkar Stadium here on Wednesday.

The Chandigarh team, which has an all-win record in its pool matches, handed Oman their third successive defeat.

In the first session, all the action was confined to Oman half and the visitors were forced to resort to desperate defending as the local lads took a formidable 4-0 lead by half-time.

Striker Mobashir scored a brace for the winners, while Inder Mohan, Ramdin, and Jatinder also found the net.

"It feels good to beat a foreign team. We have come here to win the title and we will do our best," Mubashir said after the match.

Last year's best female player scored a hat-trick for Mizoram, while Lalruatkimi, Lalabiakoiki and Elizabeth were the other scorers for the winners.

After Anita had given AP the early lead, Revathi scored four goals in a span of a mere eight minutes to give her team a formidable 5-0 lead in just 15 minutes.

Andhra, who were leading 8-0 at the break, continued to pummel their rivals in the second half as well, scoring another six goals.

Tyssad School of Meghalaya edged out St Joseph of Tamil Nadu 3-2 in a hard fought clash, thanks to a hat-trick by Pynhum Sulhet.