AC Milan CEO Adriano Galliani has moved to quash speculation the club could be interested in cashing in on teenage sensation Stephan El Shaarawy. 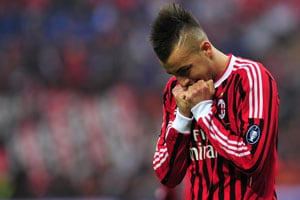 AC Milan CEO Adriano Galliani has moved to quash speculation the club could be interested in cashing in on teenage sensation Stephan El Shaarawy.

El Shaarawy has been one of the few positives to emerge from the embattled Milan camp amid their relatively disastrous start to the campaign, scoring four goals in six games including a brace against Cagliari in midweek.

Milan coach Massimiliano Allegri has been under huge pressure but the 19-year-old El Shaarawy rescued his side again on Saturday with a goal in a 1-1 draw away to Parma.

As well as sporting a distinctive mohican haircut and keen eye for goal the teenager is known for his agility, vision and speed.

And reports in the Italian media claim Manchester United are monitoring the player and that United manager Sir Alex Ferguson believes he could slot comfortably into the English Premier League.

When asked about interest from the English giants, Galliani said: "We're not in the selling market. He is only 19 years old and we've just extended his contract until 2017, so our fans can rest assured."

El Shaarawy owes his Arabic name to his Egyptian father but has an Italian mother, has played for Italy and is currently a mainstay of the Azzurri under-21 team.

He is Milan's top goalscorer so far this season and his brace against Cagliari last Wednesday handed Milan their first win at the San Siro stadium in four attempts.

Despite his impressive start, however, he could face an uncertain few months.

Allegri lost the spine of an impressive squad during the summer, with Zlatan Ibrahimovic and Thiago Silva being sold to Paris St Germain and several other key players moving on or retiring.

However Robinho is on his way back from injury, having replaced Kevin-Prince Boateng late in the second half against Parma, and fellow Brazilian Alexandre Pato is set to return to the fray in the coming weeks.

Spain international Bojan Krkic was also given his first full game for Milan on Saturday, although the good news for El Shaarawy is that the pair complemented each other.

El Shaarawy is the only other Milan player along with goalkeeper Christian Abbiati to have started all of Milan's games so far, but Galliani hinted that could be about to change.

He added: "We've never before had a 19-year-old who can counter-attack the way he does and because there's a lot less competition he is getting a chance to play, but he also needs to be patient."

AC Milan face Zenith in Saint Petersburg on Wednesday hoping to make amends for their scoreless draw against Anderlecht in their Champions League Group C opener at home two weeks ago.

Comments
Topics mentioned in this article
Football Stephan El Shaarawy Javier Pastore AC Milan
Get the latest Cricket news, check out the India cricket schedule, Cricket live score . Like us on Facebook or follow us on Twitter for more sports updates. You can also download the NDTV Cricket app for Android or iOS.