Harry Redknapp has promised Tottenham will go on the attack when they face AC Milan in the second leg of their Champions League last 16 tie at White Hart Lane on Wednesday. 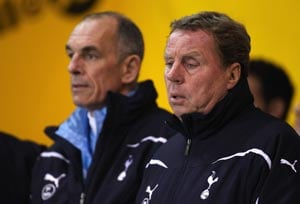 Harry Redknapp has promised Tottenham will go on the attack when they face AC Milan in the second leg of their Champions League last 16 tie at White Hart Lane on Wednesday.

Redknapp's side are in pole position to reach the quarter-finals after Peter Crouch's goal secured a 1-0 win in a tempestuous first leg at the San Siro last month.

In the circumstances it would be easy for Redknapp to employ a low-risk defensive strategy aimed at frustrating Milan, but the Spurs boss is adamant he will stick to the cavalier approach that has already produced several high-scoring wins in the competition.

"I think we've got enough to hurt Milan at home. We'll be positive," Redknapp said. "We will play an attacking team. We'll play (Aaron) Lennon and probably Gareth Bale and have a go."

Redknapp's commitment to attack is understandable given the wealth of creative talent as his disposal, especially since Wales winger Bale returned from six weeks out with a back injury in Sunday's 3-3 draw at Wolves.

Dutch playmaker Rafael Van der Vaart could also feature after recovering from a calf injury, but it is the presence of Bale that is most likely to worry Milan.

His virtuoso displays against Inter Milan in the group stage established Bale as one of Europe's brightest young stars and Redknapp can't wait to unleash him on the Italian league leaders.

"When Gareth came on and started to run with the ball at Wolves it was exciting. We've missed that for the last five or six weeks," Redknapp said.

"That was his first real exertion for six weeks. He started straight away to run with the ball and, when he does that, he scares people to death.

"He carries the game at the opposition and that makes a massive difference.

"Peter Crouch has had a great European campaign as well. And Van der Vaart has a good chance for Wednesday. I hope he will be fit."

Massimiliano Allegri's side have been the most formidable team in Serie A this season, but Italian football is at a low ebb at present and it would be little surprise if Tottenham followed in the footsteps of Arsenal and Manchester United after their Premier League rivals also dumped out Milan in recent years.

Milan underlined their dominance in Italy with a 1-0 win at Juventus on Sunday, but they will be without several experienced players at White Hart Lane.

Gennaro Gattuso is serving a suspension after being booked in the first leg, although his absence might be a blessing as the veteran midfielder had enraged Tottenham with his astonishing touchline row with Redknapp's assistant Joe Jordan.

Andrea Pirlo and Massimo Ambrosini are also sidelined and Allegri will need exceptional performances from Robinho and Zlatan Ibrahimovic to overturn the deficit.

If Milan are to successfully subdue a sell-out Spurs crowd that is sure to be at fever pitch, Allegri could do with former Arsenal midfielder Mathieu Flamini keeping his emotions in check on his return to north London.

"In four years in the Premier League I've never injured an opponent. I was never sent off in England," he said.

"I am not a dirty player. I didn't have a bad intention. I apologised for what I did.

"Unfortunately he got injured but I went to the dressing room and apologised to Vedran personally and he accepted it."

Allegri remains certain Tottenham are beatable if Milan play at their best and he added: "It must be said that despite playing good football, Tottenham are not among the strongest in Europe.

"But we mustn't make mistakes against them because they profited with a good counter attack to beat us 1-0."

Comments
Topics mentioned in this article
AC Milan Tottenham Hotspur Football Real Madrid Barcelona Inter Milan
Get the latest updates on ICC T20 Worldcup 2022 and CWG 2022 check out the Schedule, Live Score and Medals Tally. Like us on Facebook or follow us on Twitter for more sports updates. You can also download the NDTV Cricket app for Android or iOS.