Andres Iniesta, who had scored the stoppage-time winner to hand Spain a 1-0 win over Netherlands in the 2010 FIFA World Cup final, took to Twitter to express his excitement about the 2014 FIFA World Cup draw. 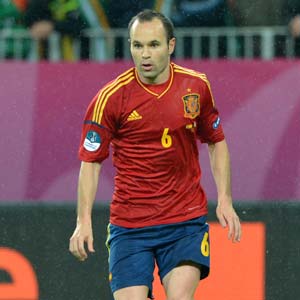 Spain doesn't know what to make of its World Cup draw. Some are confident, while others are fearful. The 2010 winners prepare to defend their title in Brazil with a squad in transition and several key players struggling to find their usual impressive form this season. Drawn alongside the Netherlands, Chile, and Australia in a tough Group B, Andres Iniesta was spurred on by the prospect of having all to play for from the opening kick-off.

Spain opens the World Cup on June 13 at Salvador against the same team it beat in the 2010 final, the Netherlands, when Iniesta scored the stoppage-time winner in a 1-0 win in Johannesburg.

But Spain goes to Brazil with more doubts than certainties, despite having picked up a second straight European Championship in-between. The nucleus of the team that has provided so much success is older, with key players like Iniesta, Xavi Hernandez and Xabi Alonso dealing with injuries this season.

Captain Iker Casillas is not even Real Madrid's first-choice goalkeeper. And while Spanish strikers like Alvaro Negredo and Fernando Llorente are succeeding in Europe, coach Vicente del Bosque may opt for Diego Costa, a Brazilian-born, naturalized Spaniard, to lead his attack.

Sports dailies AS and Marca called Group B "lethal" and "dangerous," with the latter saying "We Start with a Final." La Vanguardia newspaper called it "The Group of Death."

Spain lost the last final it played - a 3-0 defeat to Brazil for the Confederations Cup earlier this year. The European champions have shown defensive frailties in World Cup qualifying, dropping points against France and Finland on home soil after conceding late goals. It has also been used to poor showings in international friendlies.

Despite the frailties, Spain is a team rich in talent with perhaps the top collection of midfielders in the world with established talents like Cesc Fabregas, Juan Mata, and David Silva, plus the likes of Javi Martinez, Thiago, and Isco waiting for their chance.