Spain were hoping to exact revenge for the 5-1 thrashing they suffered at the hands of the Dutch at last year's World Cup, but their chances were undone by two goals in the opening 15 minutes. 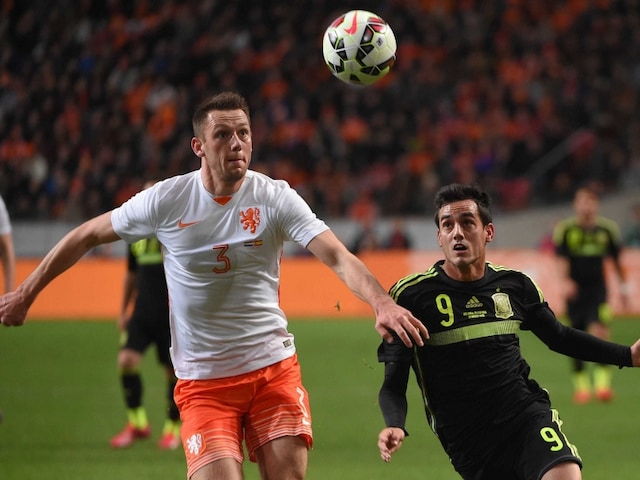 The Netherlands once again proved too good for an under-par Spain as goals from Stefan de Vrij and Davy Klaasen handed the hosts a 2-0 friendly win in Amsterdam on Tuesday. (Mexico Edges Paraguay)

Spain were hoping to exact revenge for the 5-1 thrashing they suffered at the hands of the Dutch at last year's World Cup, but their chances were undone by two goals in the opening 15 minutes.

De Vrij rose highest to head home Wesley Sneijder's in-swinging cross before Klaasen was given an alarming amount of space inside the box to fire home on the rebound after David de Gea had saved his initial effort.

Defeat means the European champions have now lost friendlies against three continental heavyweights France, Germany and the Dutch since being dumped out in embarrassing fashion after just two games at the World Cup. (Argentina Edge Past Ecuador)

"We paid for the first 20 minutes. We dominated the game, were on top of them and had a lot of chances, the only thing we lacked was a goal."

His Dutch counterpart Guus Hiddink said it was a good result but denied that it had been a crucial one for him even though it was only his third win in eight games since taking over after last year's World Cup finals.

"This result will boost the confidence of the team," said the 68-year-old, who is in his second spell with the national side.

"Is it a relief to me personally? No because I didn't have the impression I had a weight bearing down on me.

"I have been criticised but journalists have a habit of being scathing. We just get on with our work and everyone is pulling in the same direction."

Del Bosque made nine changes to the side that sneaked past Ukraine 1-0 in a Euro 2016 qualifier on Friday, whilst Hiddink made just five alterations from his side's 1-1 draw with Turkey.

The extra strength in the Dutch side paid dividends in a flying start as De Vrij, who also scored in the 5-1 thrashing in Salvador 10 months ago, opened the scoring with a superb header from Sneijder's dangerous cross.

Just three minutes later it was 2-0 when Klaasen pounced on a loose ball inside the area and despite firing his first effort too close to De Gea, the rebound fell kindly for the Ajax midfielder to lash the ball high into the net.

Spain improved as the half wore in and should have pulled a goal back when Pedro Rodriguez was denied by Kenneth Vermeer after robbing Bruno Martins Indi, whilst debutant Juanmi curled an effort inches wide.

Cesc Fabregas missed an ever better chance at the start of the second period as he failed to make contact with Juan Bernat's inviting cross.

However, the Netherlands' set-pieces were still causing problems at the other end and Martins Indi should have scored a third when he headed over despite being unmarked six yards out.

Sevilla winger Vitolo was also making his international debut and passed up a huge opportunity to get the visitors back in the game midway through the second-half when he skewed wide.

David Silva also had a goal ruled out for a marginal offside call as Spain continued to have the better of the second-half, but they lacked a killer instinct in the final third as the Netherlands held on.

Comments
Topics mentioned in this article
Spain Netherlands Stefan De Vrij Davy Klaassen Football
Get the latest Cricket news, check out the India cricket schedule, Cricket live score . Like us on Facebook or follow us on Twitter for more sports updates. You can also download the NDTV Cricket app for Android or iOS.