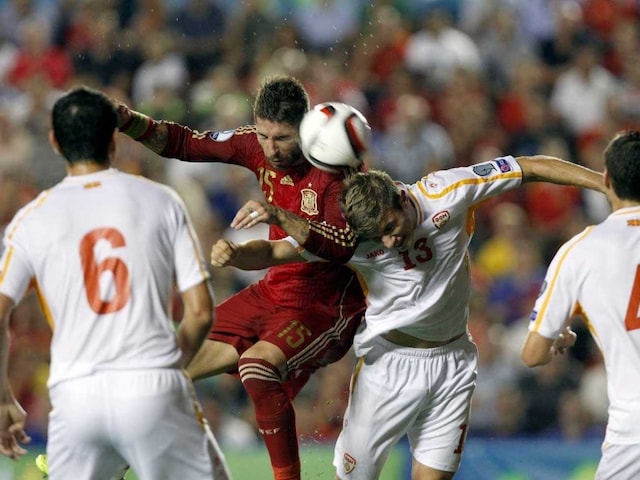 Spain overcame a few nervous moments to ease past Macedonia 5-1 with five different goal scorers in its first qualifier for the 2016 European Championship on Monday.

Ramos opened the scoring by converting a penalty in the 16th with a deft lob into the middle of the net after Silva was tumbled down by defender Stefan Ristovski. A minute later, Alcacer found himself alone in front of goal after Juan Francisco "Juanfran" Torres drew Macedonia's defenders to the right before making a precise pass that the Spain forward converted to get a goal on his debut.

But Juanfran then tripped Ibrahimi in the penalty area and the Macedonian converted in the 28th. Four minutes later Rodriguez had his accurate shot deflected by Pacovski.

Midfielder Busquets then scored his first international goal - in his 69th appearance - in first half injury time with a low, powerful shot to goalkeeper Tomislav Pacovski's left.

Casillas prevented another comeback attempt when he acrobatically got a foot to Adis Jahovic's powerful shot in the 47th minute.

Silva exchanged passes with defender Jordi Alba for his 20th international goal in the 50th, and Rodriguez added the fifth with a delicate lob over Pacovski in injury time.

Del Bosque had included El Haddadi in the squad as a late replacement for the injured Diego Costa in a bid to breathe new life into Spain after its botched World Cup defense in Brazil.

Also in Spain's Group C, Slovakia won 1-0 at Ukraine, and Luxembourg held Belarus to a 1-1 draw.

Robert Mak gave Slovakia the win by scoring with a left-foot shot in the 18th minute, while Belarus needed a 78th-minute equalizer from Stanislav Dragun to rescue a point at Luxembourg. The hosts had gone ahead in the 42nd when Lars Gerson volleyed into the roof of the net.

Comments
Topics mentioned in this article
Spain Sergio Ramos Paco Alcacer Sergio Busquets David Silva Pedro Football
Get the latest Cricket news, check out the India cricket schedule, Cricket live score . Like us on Facebook or follow us on Twitter for more sports updates. You can also download the NDTV Cricket app for Android or iOS.