Pictures of Lionel Messi picking up the FIFA prize in Zurich dressed in an eye brow-raising black and white-spotted suit and bow tie, splashed across front pages. 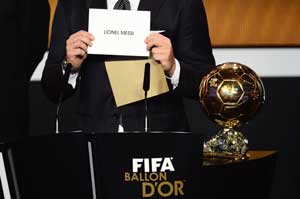 Spain bathed in glory on Tuesday after Barcelona star Lionel Messi won the Ballon d'Or for best footballer of the year for a record fourth time, cementing his claim to be one of the greatest players of all time.

Spain coach Vicente del Bosque also snatched top honours, in recognition of their Euro 2012 triumph, which followed its 2010 World Cup win and Euro 2008 crown, to top a virtual clean sweep for Spanish and La Liga players at the prestigious awards.

But it was the smiling 25-year-old Argentine international who stole the show, with pictures of him picking up the FIFA prize in Zurich dressed in an eye brow-raising black and white-spotted suit and bow tie, splashed across front pages.

"Unique, unmatchable Messi," the paper said after the striker scored a stunning 91 goals in 2012 in all competitions, smashing the 40-year-old record of German legend Gerd Mueller of 85.

"Leo Messi was crowned yesterday as the best player in history," Marca said. "No-one until now had won four Ballons d'Or in a row. Leo has done it, and consecutively."

Rival sports daily AS, too, lavished praise on Messi.

"I have never seen a player with such power. He lacks aesthetic but he has plenty of everything else," he said, predicting even more Ballons d'Or to come.

On his return to Barcelona airport, Messi told reporters that he had forgotten many people in his speech but had wanted to mention Barca coach Tito Vilanova, who is being treated for a cancer of the salivary gland, and defender Eric Abidal.

The French defender is training with the squad again after a liver transplant.

"When things calmed down I remembered Tito and Abidal and everyone, obviously," Messi said, apologising for his omission.

Messi was one of three players in the Spanish league on the shortlist for the world's best footballer award. The two others were his Barca team-mate Andres Iniesta and rival striker Cristiano Ronaldo of Real Madrid.

In addition, all of the top six names in the final ranking that Messi topped were from La Liga teams.

In the FIFPro selection for the best 11-man line-up, meanwhile, six were Spaniards and all but two were from the Spanish league.

Barcelona president Sandro Rosell said he was "very proud of our players and to be with Barcelona", the club said on its Twitter feed.

The president of the Spanish Royal Football Federation, Angel Villar, said Del Bosque's award was "a new prize for Spanish football that is going through some marvellous years".

"Congrats to Leo Messi for his new golden ball," he wrote. "It was difficult with two cracks like Iniesta and Cristiano."

"How proud I feel of Del Bosque, making history with this great squad," he added.

Comments
Topics mentioned in this article
Football FIFA FC Zurich Cristiano Ronaldo Lionel Messi
Get the latest updates on ICC T20 Worldcup 2022 and CWG 2022 check out the Schedule, Live Score and Medals Tally. Like us on Facebook or follow us on Twitter for more sports updates. You can also download the NDTV Cricket app for Android or iOS.