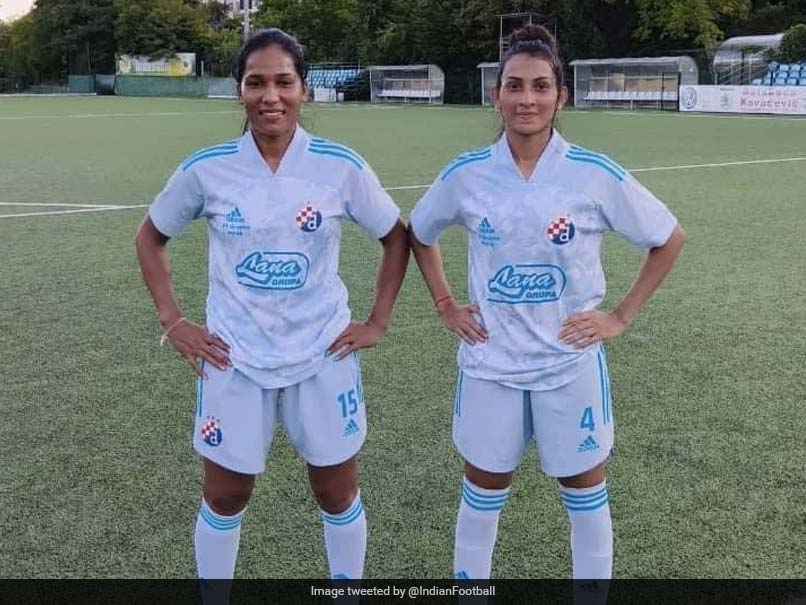 Soumya Guguloth and Jyoti Chouhan were signed by the club after a successful trial.© Twitter

Indian women's national team player Soumya Guguloth and her Gokulam Kerala FC teammate Jyoti Chouhan have signed a year-long contract with Croatian giants Dinamo Zagreb, becoming their first overseas recruits. They were signed up by the club after a successful trial in Croatia. Both of them won the Indian Women's League last season with Gokulam Kerala FC. Soumya and Jyoti are the first ever international players for the Dinamo Zagreb women's football team.

"I'm very excited to play out of country this is a great opportunity for me. I never expected to play for a club like Dinamo. This will be helpful for me and my family and my country.

"I hope to give my best during the season. I would like to take this opportunity to thank everyone who has supported on me," said Soumya.

"This is a great opportunity for me, and I feel lucky that I got this platform. I will use this platform and give my 100% and will work hard to learn more and perform better when I am at Zagreb, Croatia, representing Dinamo," said Jyoti as she prepares to join her Gokulam teammate for this season at Dinamo.

Dinamo Zagreb is the most successful club in Croatia having won 46 trophies. Their men's team is in the UEFA Champions League 2022-23 group stage, alongside European powerhouses like Chelsea and AC Milan.

ZNK Dinamo Zagreb, the women's team, have similar ambitions and hope that the two players from India can help them achieve their goals.

"Step by step the puzzle was put together and in the seventh year of club's existence (since becoming the women's team of Dinamo Zagreb), we took a step higher. I believe that the girls that are coming will justify the coach's trust," said ZNK Dinamo club president, Josipa Maslać Petričević.

"I'm satisfied. We are signing players that are necessary for boosting our team." Croatia is among the top performing countries in the world and made it to the FIFA World Cup final in 2018 where they lost to France.

Soumya and Jyoti were among the 12 players who took part in the recently-held Women In Sports trials held in Kolkata.

The players were coached, assessed and trained by coaches from five international clubs (Rangers WFC, Marbella FC, ZNK Dinamo Zagreb, Western Sydney Wanders FC and Melbourne Victory FC) in the hopes of getting selected and being offered a professional contract.

They also played two friendly matches with the local boys' teams in Kolkata.

While all coaches were pleasantly surprised by the level, technique and experience of the two Indian women, ZNK Dinamo Zagreb were quick to call Jyoti and Soumya to Croatia for their pre-season and extended trials.

Comments
Topics mentioned in this article
Dinamo Zagreb Football
Get the latest updates on Fifa Worldcup 2022 and check out  Fifa World Cup Schedule, Stats and Live Cricket Score. Like us on Facebook or follow us on Twitter for more sports updates. You can also download the NDTV Cricket app for Android or iOS.