BATE Borisov, who stunned Bayern Munich last time out, were brought back to earth with a thud here Tuesday as Roberto Soldado's hat-trick earned Valencia a 3-0 win. 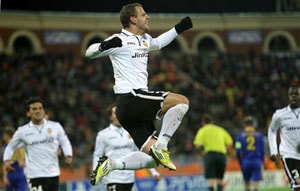 BATE Borisov, who stunned Bayern Munich last time out, were brought back to earth with a thud here Tuesday as Roberto Soldado's hat-trick earned Valencia a 3-0 win.

BATE went into the game as the surprise Group F table toppers after maximum points from their opening two games.

But their woeful record against Spanish opposition continued at Minsk's Dinamo stadium with this comprehensive loss leaving them with nothing to show from seven attempts.

Valencia, whose reward was to go top of the table on goal difference, started the livelier, with Soldado's fifth minute effort forcing a good block from BATE goalkeeper Andrei Gorbunov.

The hosts were looking more dangerous as the game progressed and on the half hour mark Aleksandr Pavlov darted into the box only for his shot to be deflected out of danger by Diego Alves's dive to the left.

The Valencia keeper then punched away the follow up from Dmitri Likhtarovich.

The Spanish visitors, who were enjoying the bulk of possession, finally broke the gridlock in first half stoppage time when Marko Simic felled Soldado.

Soldado converted the penalty with Gorbunov diving the wrong way.

The second half was only ten minutes old when Valencia doubled their advantage and it was Soldado again who did the damage.

The Valencia striker struck low into Gorbunov's net with a right-footed volley after being set up by a cross from Andres Guardado.

Soldado went very close to grabbing another seconds later but with Gorbunov beaten BATE midfielder Aleksandr Volodko stepped in to block the shot on the line.

The red-hot striker did get his third on 69 minutes after a neat one-two with Tino Costa for his second Champions league hat-trick.

A fourth looked on the cards but his cheeky chip with quarter of an hour to go sailed wide.

Valencia's second win of the campaign pushed them up to the top of Group F from BATE and Bayern with all three on six points.

Comments
Topics mentioned in this article
Football Roberto Soldado BATE Valencia
Get the latest updates on ICC T20 Worldcup 2022, check out the Schedule and Live Score. Like us on Facebook or follow us on Twitter for more sports updates. You can also download the NDTV Cricket app for Android or iOS.