Napoli were left frustrated by a 1-1 draw away to Cagliari at a virtually empty Sant'Elia stadium. 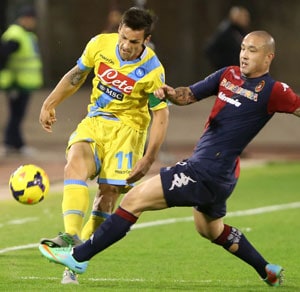 Napoli goalkeeper Pepe Reina was forced off injured as the Serie A title challengers were left frustrated by a 1-1 draw away to Cagliari on Saturday.

Rafael Benitez's side travelled to Sardinia hoping to close the gap on second-placed Roma and champions Juventus ahead of their respective games Sunday against Catania and Atalanta.

However Cagliari, beaten at home only once this season, produced a determined performance at a virtually empty Sant'Elia stadium to leave Napoli third but now two points behind Roma and seven behind Juventus.

Benitez's woes deepened when Reina, who made his return from recent injury for Napoli's final league game of the year, hobbled off on the stroke of half-time with an apparently fresh muscle injury.

Benitez complained about the "terrible" state of the pitch, adding in comments to Sky Sport Italia: "It was difficult to pass the ball around quickly. We had a lot of chances, but it's not good enough."

Juventus host Roma on January 5 and Benitez added: "We've dropped two points but we have to keep on working like we have been. We know Juve host Roma soon and maybe we can capitalise.

"But we also have to focus on what we're doing."

Cagliari midfielder Radja Nainggolan showed once more why he is a target, reportedly, for some bigger Serie A sides and said: "We were up against a top level side and we could have done a little better after the interval but against the third-placed side in the league a draw is a top result."

On his future, the Belgian added: "It's only the media who are talking about the transfer market. I haven't received any offers and I'm happy where I am at Cagliari."

Cagliari started in positive fashion and Nene had the ball in the net after five minutes only to be ruled offside -- earning a yellow card in the process after failing to heed the referee's whistle.

Four minutes later, however, the Sardinians were celebrating after a finely-worked move involving Nainggolan and Davide Astori saw Nene drive the latter's delivery past Reina from 10 yards out.

Overall, it was to prove a rollercoaster night for Napoli striker Gonzalo Higuain, who first scuffed a shot from a promising position before putting Napoli on level terms.

Goran Pandev was pulled down from behind by Astori and after the referee pointed to the spot Higuain stepped up and beat Vlada Avramov in the hosts' net.

Reina, meanwhile, was replaced by Rafael Cabral after pulling up and holding the back of his leg while collecting the ball under no pressure.

Napoli emerged fired up for the second half and Pandev did well to dribble his way into the area to deliver for Lorenzo Insigne but the Italy forward was just out of reach.

Pandev was then on the receiving end of a similar cross from Higuain but the Macedonian failed to connect while unmarked at the back post.

Two minutes later the visitors were in uproar after a stunning volley by Spaniard Jose Callejon beat Avramov from distance but was chalked off after Pandev was ruled offside.

Ten minutes later Mauricio Pinilla rose above French defender Anthony Reveillere to send a header wide of Rafael's upright at the back post.

Napoli had little to offer in the closing minutes and it was Cagliari who were left celebrating having gone six games unbeaten.

Earlier, Udinese had Thomas Heurtaux's 65th minute strike to thank for a 2-1 win away to struggling Livorno after Luca Siligardi had levelled for the hosts following Nico Lopez's opener on 10 minutes.

Comments
Topics mentioned in this article
Gonzalo Higuain Pepe Reina Steven Gerrard Barcelona Bayern Munchen Liverpool Football Manchester United Arsenal
Get the latest Cricket news, check out the India cricket schedule, Cricket live score . Like us on Facebook or follow us on Twitter for more sports updates. You can also download the NDTV Cricket app for Android or iOS.