Roma had Daniele De Rossi and Leandro Castan sent off to end their 17-game unbeaten run. 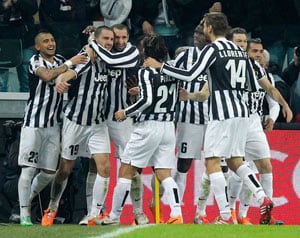 Juventus romped to a 3-0 win over nine-man Roma on Sunday to end the visitors' unbeaten run in the league this season and extend their lead in Serie A to eight points.

High-flying Roma came to Turin confident of taking at least a share of the spoils in a bid to close the gap to Antonio Conte's leaders and to protect their unbeaten streak after 17 games.

However the early spark shown by Rudi Garcia's men fizzled out quickly and any kind of fightback from going 2-0 down in the 48th minute looked slim after Daniele De Rossi and Leandro Castan were sent off late in the second half.

"I haven't seen the pictures on Daniele's foul so I prefer not to make comment on it," Garcia told Sky Sport Italia after the game.

"But we didn't lose the match because of these decisions. When Daniele was sent off we were already 2-0 down.

"We weren't as efficient as we can be, and tonight we didn't have as many chances as we would have liked.

"Now we have to get back to winning ways. Our aim this season is to get into Europe, so in second place we're in the right position."

Juve's 16th win of the campaign left them top on 49 points, eight ahead of Roma and 13 ahead of Napoli ahead of their home game against Sampdoria on Monday when the rest of the programme will resume.

Conte, whose side have now won ten on the trot since the shock of a 4-2 defeat away to Fiorentina, joined several of his players in waving off suggestions the scudetto was all but wrapped up.

"There are still plenty of games in the season and anything can happen," said Conte.

"The challenge now is to make sure this eight-point cushion doesn't become an albatross for us."

Captain Francesco Totti led the counter-attack after Leonardo Bonucci had been dispossessed but when he laid off for Adem Ljajic his effort from a tight angle was thwarted by Giorgio Chiellini's superbly-timed sliding tackle.

Roma suffered a blow on 13 minutes when lively midfielder Miralem Pjanic was forced off with a sore knee to leave his side a man down.

Juve took full advantage to break the deadlock two minutes later when Arturo Vidal chipped Morgan De Sanctis at his near post after Carlos Tevez had been given far too much time to set up the Chilean.

Pjanic returned immediately after and saw a low rasping shot turned away by Buffon after Gervinho had stumbled and missed the cutback.

De Sanctis and Buffon were both kept busy but the hosts began a period of domination which ultimately saw several chances go amiss.

Vidal dispossessed Pjanic to counter and set up Tevez, only for Lichsteiner to head the cross waywards.

Juve resumed in similar fashion after the interval and stunned Roma when Bonucci ghosted in at the far post to slid Pirlo's sublime free kick past De Sanctis three minutes after the restart.

Roma created two half-chances but an alert Buffon came out to block Pjanic's deep cross for Strootman, while Totti was promptly pushed off the ball after being put through with a chance on goal.

Totti, who had added spice to the fixture with criticism of the club in previous days, was jeered off the pitch on his way to being replaced by Alessandro Florenzi.

With one elder statesman gone, Roma's chances looked slim but suffered another blow when Daniele De Rossi saw red on 75 minutes for a needless but vicious tackle on Chiellini.

Barely two minutes later he was followed by defender Leandro Castan, who was sent off for handball on the goalline, handing Juve a penalty which Mirko Vucinic, who had replaced Tevez on the hour, drove with ease past De Sanctis.