With Roma comfortably on top with 21 points from seven games, Napoli and Juventus are both two points adrift in second and third respectively with Inter in fourth. 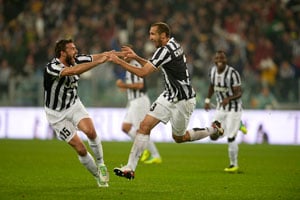 Champions Juventus overcame conceding a first-minute goal at home to AC Milan to stun their bitter rivals 3-2 and move to within two points of Serie A leaders Roma on Sunday.

Title contenders Napoli had heaped the pressure on Juventus after a 4-0 rout of Livorno which moved Rafael Benitez's men up to second place in the table.

But after being stunned by Sulley Muntari's first-minute opener in Turin, Antonio Conte's men were soon level thanks to Andrea Pirlo's sublime free kick.

In a pulsating encounter played in torrential rain, Juve upped the pace after the interval when Sebastian Giovinco gave the hosts a 2-1 lead and Giorgio Chiellini added a third following the expulsion of Milan defender Phillip Mexes.

The shine was taken off a convincing win, however, when Muntari struck his second of the match and Juve escaped dropping two precious points when the Ghanaian saw a bullet header go just over at the death.

With Roma comfortably on top with 21 points from seven games, Napoli and Juventus are both two points adrift in second and third respectively with Inter in fourth.

Inter, stunned 3-0 at home by Roma on Saturday, are seven points off the lead, five shy of Napoli and Juventus and only one ahead of Verona, who won 4-1 win away to struggling Bologna.

Verona's presence among a prestigious top five was also partly down to the goalless draw between Lazio and Fiorentina at the Olympic Stadium, which left them seventh and sixth respectively.

Injury-ravaged Milan, who are still without playmaker Kaka and suspended striker Mario Balotelli, and are now languishing in 12th place with a 13-point deficit to Roma.

Muntari, unmarked yards from Gianluigi Buffon's back post, gave the hosts a perfect start when he sent a first-time effort past the 'keeper as the visitors worked the ball towards goal from kick-off.

But after Nigel De Jong fouled Carlos Tevez from behind on the quarter hour, Andrea Pirlo stepped up to whip a curling freekick past Christian Abbiati in the Milan goal after the 'keeper had got his hands to the ball.

In a combative first half both sides had chances to score, although Juve arguably had the upper hand.

Abbiati was a bag of nerves when Tevez put a deep cross from midfield back into play at the near post, prompting midfielder Riccardo Montolivo to flirt with an own goal by heading towards the 'keeper, who tipped over.

Tempers often frayed and Leonardo Bonucci was cautioned for a headbutt on Robinho that left the Brazilian bleeding and requiring treatment.

Later, Mexes lashed out at Chiellini after some a scuffle in the box during a corner, the Frenchman receiving his first caution.

On the hour Ghanaian Kwadwo Asamoah fired just over at the second time of asking, while Paul Pogba's arrival for the second half saw the midfielder's silky skills causing Milan all sorts of problems.

Juve had the momentum but it took a slice of individual skill for the hosts to take the lead, substitute Sebastian Giovinco weaving his way around two defenders to beat Abbiati at his far post with a drive that went through the net.

Milan's hopes of levelling suffered a blow when Mexes saw red after a challenge on Giovinco which gave Juve a free kick 26 metres from goal.

Pirlo's superb free kick came off the woodwork and with Milan's defence at the races, and Abbiati stranded, Chiellini was quick to first-time the rebound into a virtually empty net.

In the dying seconds, however, Juve gave Muntari space and the Ghanaian unleashed a left-foot strike from the left of the area which took a slight deflection before beating Buffon in the Juventus goal.

Juve breathed a sigh of relief when Muntari's bullet header from a corner in injury time sailed just over Buffon's crossbar.