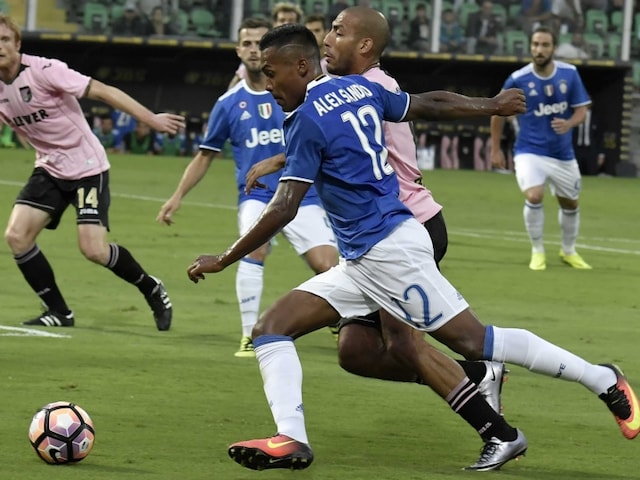 Juventus-Palermo Serie A match in progress on Saturday.© AFP

Massimiliano Allegri insists focus is fully on claiming the first points of Champions League campaign after a cagey 1-0 win at Palermo on Saturday maintained the early-season doubts hanging over Juventus.

The Italian champions travel to Dinamno Zagreb on Tuesday looking for the win that would get their Group H campaign up and running two weeks after a scoreless draw in Turin against Sevilla.

But, unlike Napoli, who cruised to a 2-0 win at home to Chievo and saw Marek Hamsik hit a cracking 100th goal for the club days before they welcome Benfica to the San Paolo, Juventus were put through the wringer.

Allegri, who paired Gonzalo Higuain and Mario Mandzukic up front for the first time, saw a flawed performance.

"In technical terms we should have done much better, but we take the three points home with us," Allegri told Sky Sport.

Defender Leonardo Bonucci was more candid: "In technical terms, we made a lot of mistakes and when you play for Juventus that can't happen.

"Palermo defended well throughout. We have to use this game as a stepping stone to improving."

Asked about the Mandzukic-Higuain pairing, Allegri added: "If you ask me, they did well. It was the first time they played up front together and today I wanted to see how they would fare."

"But now we look to Zagreb, where we want to win."

Juventus started this season being talked of as possible winners, two years after bing outclassed 3-1 by Barcelona in the Berlin final.

But they have failed to score in the competition so far, and Allegri added: "We need to start scoring. Against Sevilla we played well but that's in the past and now we have Dinamo." Allegri rested Dybala in place of Mandzukic, a choice that almost paid dividends when the Croatia international came close on several occasions.

Palermo were out to make life difficult, and ultimately succeeded during a first half that saw three players from each side earn cautions.

Higuain, looking for his fifth goal in six games, was tightly marked throughout and gave Juve a brief scare when left on the pitch clutching his lower back and requiring treatment after falling heavily under a challenge by Posavec.

Juve should have done better on the counter when Higuain ran on to Mandzukic's smart backheel in midfield to set up Mario Lemina for a shot that Posavec parried, before his central defence headed to safety.

It was Juve's best collective play of the game, but epitomised their evening's work.

It took a delection from Edoardo Goldaniga, who stuck his leg out to stop Dani Alves's speculative shot from 30 yards out, for Juve to finally beat Posavec.

Their next shot on goal didn't come until 15 minutes later, Posavec parrying a crisp drive from Mandzukic from close range and the 'keeper then somehow getting his hand to Mandzukic's drive from eight yards out.

Hamsik's impressive 39th minute strike, the Slovakian running on to Lorenzo Insigne's precision pass to beat Stefano Sorrentino at his far post, was his 100th in Napoli colours since joining the club from Brescia in 2007.

Napoli remain second, a point behind Juventus. Slovakian international Hamsik, who is now only 15 short of equalling the all-time scorers' record at the club, held by former icon Diego Maradona, said the focus is now on Europe. "It's a great landmark, I'm delighted but what counts most is results," he told Premium Sport.

"We're near the top of the table, but now our focus is on the Champions League."

Comments
Topics mentioned in this article
Juventus Palermo Napoli Chievo Football
Get the latest Cricket news, check out the India cricket schedule, Cricket live score . Like us on Facebook or follow us on Twitter for more sports updates. You can also download the NDTV Cricket app for Android or iOS.