Inter Milan's 4-1 loss was their first home defeat to Cagliari since 1995. City rivals AC Milan had to settle for a point at promoted Cesena. 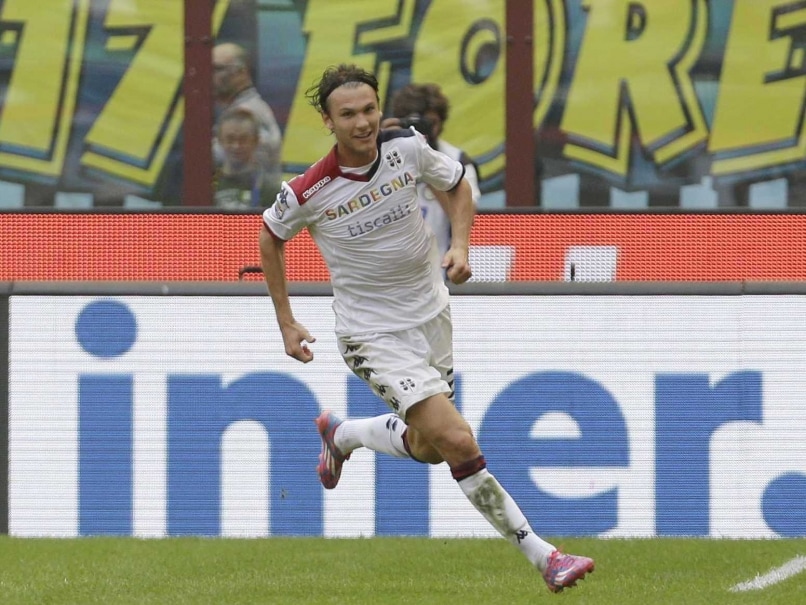 Swede Albin Ekdal hit a first-half hat-trick as Cagliari stunned ten-man Inter Milan 4-1 at the San Siro on Sunday while city rivals Milan had to settle for a point at promoted Cesena.

Unbeaten champions Juventus sit top of the Italian top flight on 15 points, the same as second-placed Roma, following their respective wins over Atalanta and Verona on Saturday.

Udinese are six points adrift before hosting Parma on Monday, with Inter stuck in fifth place, seven points behind the leaders after suffering their first home reverse to Cagliari since 1995.

Inter had scored 10 goals and gone unbeaten in their first four games but within half an hour coach Walter Mazzarri was on his knees in despair against a team which had started the day rooted to the foot of the table with just one point.

Marco Sau broke the deadlock after 10 minutes when Inter's defence, notably stand-in captain Yuto Nagatomo, left the Cagliari striker on his own in an attempt to beat the offside trap following a long punt from midfield.

Inter were back on level terms when Pablo Osvaldo tapped into a virtually empty net amid Cagliari protests following Hernanes' cheeky free kick.

But Inter's hopes were dented inside the half hour when Nagatomo was cautioned for a second time following a needless foul on Andrea Cossu.

Although Samir Handanovic did well to parry a Daniele Dessena drive, Ekdal picked up the rebound to sweep home from the edge of the penalty box.

Ekdal grabbed his second on 28 minutes when he was left unmarked to volley past the flailing Inter 'keeper after Victor Ibarbo had outmuscled the Inter defence to the right of goal to deliver a precise cutback for the Swede.

Cagliari should have gone 4-1 up when the referee pointed to the penalty spot following Nemanja Vidic's foul on Sau, but Handanovic did well to parry Cossu's effort.

Inter were still in panic mode and Ekdal grabbed his third on the stroke of half-time when he pounced on a loose ball as Inter failed to clear a corner. He became the first Swede since Zlatan Ibrahimovic to achieve the feat in Serie A.

Osvaldo had the ball in the net six minutes into the second half but he was ruled offside and later Vidic saw a header from Fredy Guarin's corner go over the crossbar.

Milan coach Filippo Inzaghi shook up his formation for the trip to Cesena, with Fernando Torres preferred as the lone striker in a 4-2-3-1 designed to get the Rossoneri back on the winning trail after last week's draw away to promoted Empoli.

But despite showing glimpses of promise, the visitors -- reduced to 10 men on 73 minutes when Cristian Zapata saw red -- failed to spark.

Torres was replaced by Giampaolo Pazzini on 70 minutes and Zapata was given his marching orders three minutes later for a foul on Gregoire Defrel.

Elsewhere, Senegalese striker Khouma Babacar rescued a share of the points for struggling Fiorentina in a 1-1 draw at Torino, who had taken a 62nd minute lead through Fabio Quagliarella.

Comments
Topics mentioned in this article
Inter Milan Cagliari Albin Ekdal Football
Get the latest updates on ICC T20 Worldcup 2022, check out the Schedule and Live Score. Like us on Facebook or follow us on Twitter for more sports updates. You can also download the NDTV Cricket app for Android or iOS.