Serie A: Carlos Bacca And M'Baye Niang Send AC Milan up to Third 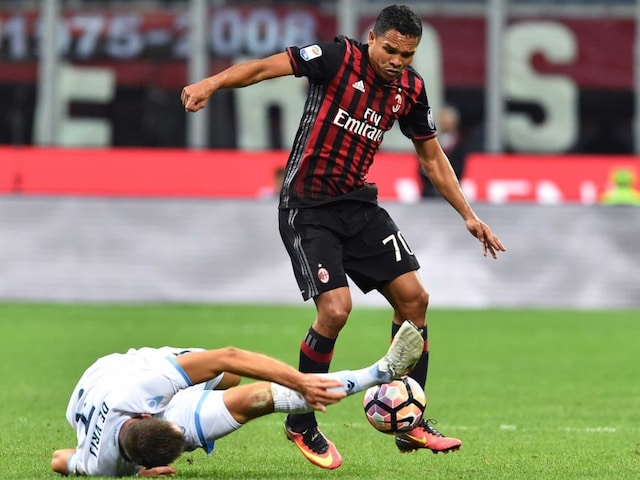 Carlos Bacca in action for AC Milan against Lazio in a Serie A match.© AFP

Carlos Bacca scored for the second game in a row and M'Baye Niang netted from the penalty spot in a disjointed performance as AC Milan beat Lazio 2-0 at the San Siro on Tuesday.

Niang sealed the win after earning and then slotting away a spot-kick on an evening in which his performance swung between the sublime and ridiculous.

The victory, a third in five games this season, provisionally moved Milan up to third ahead of the rest of the midweek programme.

Lazio were off to a positive start with Milan's teenage goalkeeper Gianluigi Donnarumma forced into a couple of early saves from Filip Djordjevic and Marco Parolo, while Danilo Cataldi was off target for the visitors in an enterprising first 10 minutes.

Donnarumma's best save then came from a Sergej Milinkovic-Savic header on 12 minutes.

But from there the hosts started to take control, with French forward Niang looking lively, having a shot saved by goalkeeper Thomas Strakosha before turning his marker only to fail to look up and pick out a team-mate with a cross-shot that Albanian Strakosha dealt with comfortably.

Milan took the lead out of the blue as Bacca ran from the halfway line onto a Juraj Kucka through ball when Lazio's high backline was caught out by a mistake from Parolo.

The Colombian Bacca, who was restored to the starting line-up after coming off the bench against Sampdoria, took his time and picked his spot to find the bottom corner on 37 minutes.

Suddenly Lazio, who had been the better side until then, were on the ropes.

Strakosha saved well from Giacomo Bonaventura but moments later was almost embarrassed by the same player as he let a tame shot slip through his grasp before spinning around to clasp the ball as it bounced towards the line.

In first-half injury time Lazio were lucky to survive as the ball pinged around in their box, Strakosha unknowingly preventing an own goal with his head before Dusan Basta cleared another Bonaventura shot off the line.

From the resulting corner Kucka climbed above Strakosha to head home but he was harshly adjudged to have fouled the keeper.

Niang should have killed the game on 56 minutes but teed up with an open goal by Bacca he somehow barely made contact with the ball and Lazio breathed a sigh of relief.

The 21-year-old French youth international Niang then sent a woeful shot out for a throw-in.

But he gave a glimpse of his undoubted potential by shrugging off a marker before stinging Strakosha's fingers with a venemous shot from distance.

And Niang won and then converted a penalty as Stefan Radu was penalised for handling the striker's cross.

The maverick forward still had time to slice a dreadful effort off target as he remained centre stage right to the end.

Comments
Topics mentioned in this article
Carlos Bacca MBaye Oumar Niang AC Milan Lazio Football
Get the latest Cricket news, check out the India cricket schedule, Cricket live score . Like us on Facebook or follow us on Twitter for more sports updates. You can also download the NDTV Cricket app for Android or iOS.