Serbia captain Dejan Stankovic said on Wednesday he is retiring from international football at the age of 33 following his country's failure to reach the Euro 2012 finals. 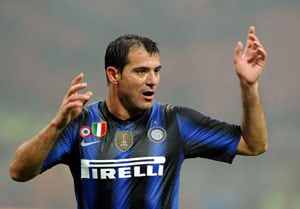 Serbia captain Dejan Stankovic said on Wednesday he is retiring from international football at the age of 33 following his country's failure to reach the Euro 2012 finals.

Sportski Zurnal newspaper quoted the Inter Milan midfielder as saying Tuesday's 1-0 loss to Slovenia heralded the end of the road for him.

"For me it was my last competitive match for the national side. I'll still have a farewell match, but then it's goodbye," the paper quoted the veteran as saying.

Stankovic made his debut in 1998 in a 3-1 win over South Korea in Belgrade and has won 102 caps, a joint national record with former striker Savo Milosevic. He also netted 15 goals.

Manchester United stalwart Nemanja Vidic -- who had a penalty saved against Slovenia -- is also thinking of retiring from the national side at the age of 30, judging by his remarks after the match.

"It is time to bring on younger players in the national side -- some of the old-stagers should retire from the team," said Vidic, who made his debut in 2002 in a 1-1 draw with Italy and has won 56 caps.

Comments
Topics mentioned in this article
Philippe Mexes Franck Ribery Gianluigi Buffon Yoann Gourcuff Inter Milan Dejan Stankovic Nemanja Vidic Football
Get the latest updates on T20 World Cup, check out the T20 World Cup Schedule and Live Score . Like us on Facebook or follow us on Twitter for more sports updates. You can also download the NDTV Cricket app for Android or iOS.