Indian football Coach Savio Medeira is hoping that his boys will not repeat the past mistakes when they open their AFC Challenge Cup campaign against Philippines in Kathmandu on Sunday. 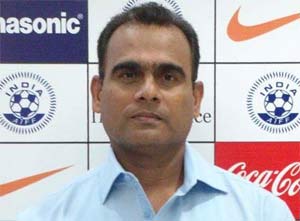 Indian football Coach Savio Medeira is hoping that his boys will not repeat the past mistakes when they open their AFC Challenge Cup campaign against Philippines in Kathmandu on Sunday.

Philippines are expected to come hard against India having lost their first match to Korea.

"At times you dont get the results which you strive for. But that won't deter us to be committed for our future success. We will keep trying and give our 100 percent to get the result we all are striving for."

"We had a spirited performance against Tajikistan. But we squandered some good chances to score in the first half. Hope things will improve in our next match," said the Coach ahead of Group B clash.

"We need to believe in ourselves and keep on playing good football, the result will come," continued Savio.

Star striker and captain of the side Sunil Chhetri, on the sidelines of the training session remained optimistic of staging a comeback.

"It's going to be another tough match but we are ready and we can pull off a great result on Sunday. We all will stay focused and do whatever is expected of us."

Though some changes in the playing XI looks imminent. Changes in the midfield and upfront would be there on the Savio mind. As the midfield looked rusty in the match against Persians and also the strikers missed too many chances.

Meanwhile, Philippines who stay two notches below India at 156 in the FIFA ranking would be vary of Indian challenge. They also would be looking at the past record where they never managed to beat India.

However, Philippines have galaxy of stars to boost off, their first goalkeeper plays for top English side Fulham. Also many of the players who are of English-Philippino origin play in Europe.

Comments
Topics mentioned in this article
Football India Cricket Team
Get the latest updates on India vs South Africa and check out  Schedule, Results and Live Score. Like us on Facebook or follow us on Twitter for more sports updates. You can also download the NDTV Cricket app for Android or iOS.