Santosh Trophy to be held in two phases, Fed Cup in Kerala 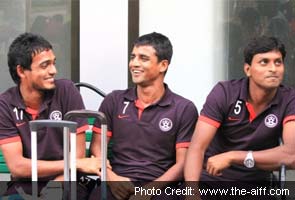 The next Santosh Trophy national football championship will be played in two phases - zonals and final -- while the Federation Cup will be held in Kerala from January 1-12, it was decided by the AIFF's Tournament Committee here today.

It was also announced that the U-14 Tournament for Boys would be held in Kalyani, West Bengal between November 10-30.

The Junior National Football Championship for Girls would be held in Odisha from November 20 to December 5.

Comments
Topics mentioned in this article
Football Maria Sharapova Nadia Petrova Anastasia Pavlyuchenkova Venus Williams Cricket
Get the latest updates on ICC T20 Worldcup 2022 and CWG 2022 check out the Schedule, Live Score and Medals Tally. Like us on Facebook or follow us on Twitter for more sports updates. You can also download the NDTV Cricket app for Android or iOS.