Kerala beat defending champions Bengal 4-2 in the tie-breaker after the final ended 2-2 in extra time to win the 72nd edition of the Santosh Trophy football tournament. 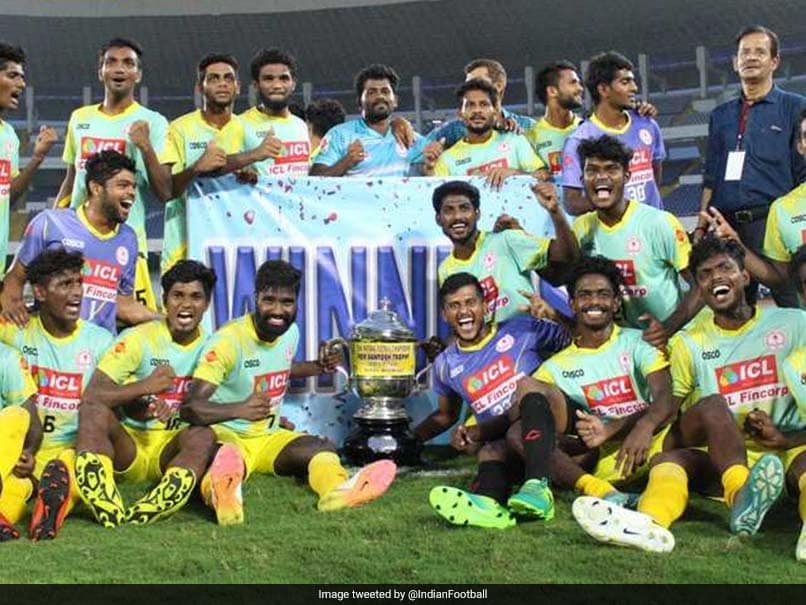 Kerala celebrate after winning the 72nd edition of the Santosh Trophy.© Twitter

Kerala beat defending champions Bengal 4-2 in the tie-breaker after the final ended 2-2 in extra time to win the 72nd edition of the Santosh Trophy football tournament at the Vivekananda Yuvabharati Krirangan on Sunday. MS Jithin scored in the 19th minute for Kerala while Jiten Murmu drew level for Bengal in the 68th minute. In extra time, Vibin Thomas found the net in the 117th minute for Kerala after Bengal's Rajon Burman was given his marching orders. Bengal's Tirthankar Sarkar scored late into injury time to take the game to penalties. Kerala kept a spotless record in the penalty shoot-out to win their sixth title.

Both sides made the solitary change from their semi-final victories. Kerala got in Afdal VK, the hero that got them to the final for Sajith Poulose to lead the line. Krishna Biswas made way for Sanchayan Samadder in midfield for Bengal.

The hosts were on the attack straightaway. Tirthankar Sarkar had two free kick chances from the left side of the area within the first six minutes.

While the first one was duly cleared by the Kerala wall, left-back Sreerag G pulled off a goal-line clearance from Monotosh Chakladar's shot after goalkeeper V. Midhun parried it away.

However, it was Kerala who broke the deadlock against the run of play. Jithin Gopalan intercepted a ball in the centre of the park and found S. Seesan close by.

He then showed some great vision to release Jithin MS on the run. Bengal's left-back, Abhishek Mukherjee was off his position and with Sourav Dasgupta failing to track the winger, Jithin brought up his fifth goal of the tournament by slotting home through goalkeeper Ranajit Majumder's gates.

All attempts of a comeback from Bengal were thwarted by the southern side. Monotosh Chakladar attempted a header from a set-piece in the 25th minute but was straight to Midhun.

Bengal skipper Jiten Murmu tried his luck after the half-hour mark from range but the ball went over the bar.

V.K. Afdal on the other hand tried to show some trickery in the opposing box but his final shot was poor and wide off target.

Tirthankar Sarkar continued to deliver dangerous and powerful free kicks, all of which were defended well by a solid Kerala defence.

Injury time in the first half threw up some excitement. First, Bidyashagar Singh ran in and forced a corner after S. Lijo deflected his shot. The ensuing flag-kick was cleared and K.P. Rahul initiated a counter-attack.

P.C. Anurag ran with the ball close to 50 yards and triggered Jithin on the right.

Ranajit thankfully got a touch to his cross which resulted in Afdal losing his momentum and the striker took a hard fall in front of an empty net as his shot went over.

The first bit of real action after the change of ends came a minute past the hour mark. Afdal turned the other way and played a backheel for Jithin MS, whose low cross was squandered by Anurag inside the penalty box.

Bengal woke up from their slumber after that. Ankit Mukherjee floated a long ball in the 66th minute and Murmu's header went wide.

A couple of minutes later, the home side drew level courtesy their captain Murmu.

Monotosh Chakladar headed down a long ball and substitute Rajon Barman broke through to feed the striker who found the back of the net with a delectable left-footer, to level matters with 22 minutes to go.

Tirthankar Sarkar, Bengal's best player by a margin tried hard to ruffle Kerala feathers but his shot from the penalty arc was parried off by Midhun.

Gopalan missed a glaring chance in the 83rd minute with Sourav Dasgupta coming off with a clean tackle.

Afdal missed another chance with two minutes to go with Ranajit off his line and both Bengal defenders combining to clear the ball with the goalkeeper absent. The scoreline was tied 1-1 as the game entered extra time.

Visibly tired, both teams slowed down in the thirty minutes. Tirthankar appeared to be the sole member in the Bengal ranks that seemed to try with sudden shots. Kerala had the numerical advantage in the last eight minutes when Rajon Burman was sent off in the 112th minute.

Sandip Bhattacharjee sprinted down to the end to play a through ball to Rajon. The striker's second touch was poor and the ball went too ahead of him. Midhun came out to collect the ball only to have Rajon's boot hit his face, for which referee Crystal John did not hesitate to produce the red card.

The winner came in the 117th minute as Kerala took advantage of the extra man and Jestin George's cross from the left was headed home by Vibin Thomas.

However, Tirthankar had other plans when he converted from a free kick from 25 yards in the sixth minute of injury time, taking the game to a shootout.

Ankit and Nabi Hussain Khan missed the first two attempts for Bengal as Midhun pulled off a save on both occasions.

Tirthankar and Sanchayan Samadder's conversion did not help as Kerala had a 100 percent record with Rahul V Raj, Jithin Gopalan and Jestin George all scoring. For the final kick, Jiten Murmu took on the gloves but Seesan S shot past the striker to deliver Kerala their first Hero Santosh Trophy after a thirteen-season gap.